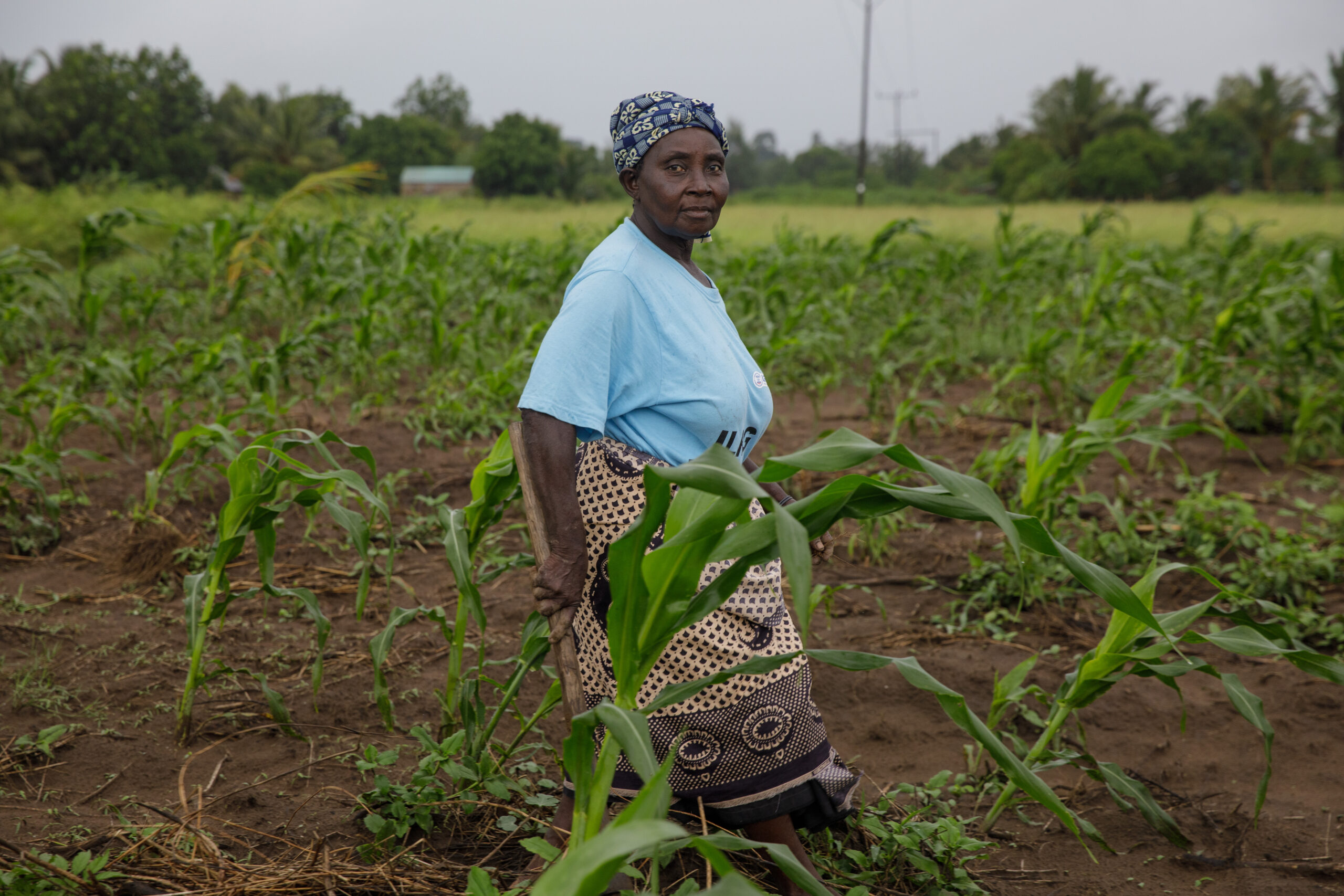 Around the world, USAID is helping thousands of rural women secure their rights to land – providing them, their children and their communities with the security they need to build a brighter future.

Floriana Mariano Jose, 69, never had her own land. Last year, she received the long-term right to use a half-hectare plot in Inhangulue, Mozambique, from local agroforestry company Grupo Madal. This was revolutionary for Floriana: her plot allowed her to move beyond subsistence farming and enter commercial value chains, growing coconuts and beans to sell. She signed a commercial farming agreement with Madal, which is providing her with seeds, guidance on how to care for these crops, and a guaranteed market for her produce. She feels confident having her land use rights documented on paper, knowing that her daughters and granddaughters will be able to continue to work this land in the years to come. As she said: “In addition to a guaranteed buyer and support to increase our production, there is a lot of work within the community to support women, to decrease violence against women, and to ensure that our husbands know they can’t take the money we make selling coconut and beans.”

Over the years, smallholder farmers encroached on Grupo Madal’s land in Zambezia, Mozambique. Rather than evicting these farmers, a partnership between USAID and Madal is resolving encroachment issues in an innovative way by providing long-term land use rights to over 1,300 people, 85 percent of whom are women like Floriana. These farmers gained access to land and formal farming contracts that will allow them to increase their income. The company is also revising internal policies and extension programs to improve outreach to women and supporting women in producers’ clubs to build agricultural and entrepreneurship skills. Joyce Daimoni is a 70 year old woman with physical disability who raised seven children and over 30 grandchildren in Chinthankhwa, Malawi. Following custom, she moved to her husband’s village when they married. Custom also dictates that once she left her maternal home, she was not allocated land there and would rely on his land for life. She has farmed the land her whole life, growing groundnuts and maize for the family to eat and sell. When a customary land documentation program started in her village this year, others in the community tried to stop her family from registering their land, saying the land belonged to the clan. Joyce sought help from the local Customary Land Committee and was referred to the Customary Land Tribunal, who decided in favor of Joyce and her husband. They were able to finally register their land, in both their names, and Joyce is relieved. “This means we are still going to be using the land. I am happy we can still cultivate the land and our children will be able to use this land too.”

USAID is working with the government of Malawi to document 10,000 customary land parcels in the Traditional Area of Mwansambo in Nkhoatakota District, making sure that women like Joyce are not left behind in the process. The land registration program will document land rights using gender-responsive approaches that include comprehensive gender equality and social inclusion community sensitization, capacity development for all stakeholders involved in registration process, household level dialogues on harmful gender norms, and skill-development training for women elected to leadership positions in land governance. When her husband passed away 15 years ago, Mary Nkhowani, 55, and her 5 children returned to her home village of Muzumbwa in Chifunda Chiefdom, Zambia, to grow maize for subsistence. She went from cultivating her husband’s land to cultivating her father’s land, never imagining women could hold land in their own right. When her father died, she inherited his land. But in rural Zambia, it is often not easy for women – especially widows – to hold land. Twice Mary experienced land grabbing by members of her extended family. Once a USAID-supported land documentation program began working in her village, Mary attended sensitization meetings and learned that women can own land; she then registered her land. Motivated by this life-changing experience, Mary volunteered to serve on the village land committee to help other women have land documented in their own names. “The certificate puts a seal on the land that it is mine and no one can grab it. It means peace for me in life and in death because there were a lot of conflicts over land. Everyone wants land and if you are not a man, no one thinks you are entitled. I feel very happy that the future of my children and grandchildren is now secure.”

In Zambia’s Eastern Province, USAID is promoting gender-responsive land registration and helping to resolve long-standing tensions over customary land rights. Over the past six years, USAID and local partners have documented the land rights of more than 30,000 parcels, benefiting 155,000 rights holders, nearly half of whom are women like Mary. When Grace Annison, 60, got married, she moved to her husband’s cocoa farm in Asorefie, Ghana. Over the past 40 years, Grace has worked on this land every day: during the cocoa season she prunes the trees, harvests the cocoa pods, and dries the beans. Throughout the year she plants pepper, cassava, plantains, and tomatoes for her family to eat and to sell, a crucial source of income in the cocoa off-season. The land and the fruits of her labor enabled Grace to raise her six children. However, as it is customary in the area, the land is registered in her husband’s name only. Grace hopes that if something happens to her husband, nobody will take the land away from her. “I hope to continue to farm the land to achieve my next dream to build a comfortable house for my family.”

USAID is working with Ecom Agroindustrial Corp., a global commodity trader, to empower women and shift gender norms that hinder their access to resources like land and extension services in cocoa communities in Ghana. Ecom is revising policies and procedures to increase gender-responsiveness in their engagement with cocoa producers. Over 2,200 farmers like Grace and her husband are also being trained on harmful gender norms that prevent women from accessing and controlling land, gender-based violence, and women’s empowerment. Land is the most important asset for farmer Sumsurnehar Begam. Early in her marriage, Sumsurnehar and her husband farmed two plots of land in West Bengal, India: a small piece of land that he had inherited and another small plot they purchased. However, they never updated their land records, and continued to farm without any formal proof of ownership for years, unaware of the risks. After saving for many years, in 2020 they decided to buy a third plot. By this time, Sumsurnehar had attended land literacy training supported by USAID and PepsiCo and knew the importance of formalizing the land transaction. As the only member of the family who is literate, she took charge and was able to complete the registration process by herself, ensuring that her name was included on the title. This gave her economic independence and made her future more secure. For the past two years she has been cultivating rice and potatoes on this land, independently managing the small farming business. With her increased confidence as a farmer, she joined other women to lease land to grow potatoes and formally enter into the potato supply chain for PepsiCo. “I feel confident that I have my own land and the proper documents to prove it. This is an asset for my good and bad days.”

USAID and PepsiCo are partnering to economically empower women farmers in the PepsiCo’s potato supply chain in West Bengal, India. So far, over 1,100 women have benefited from improved access to land and agronomy training, growing their confidence and economic independence while supporting PepsiCo to meet business and sustainable farming goals. Like most rural women in Zor-Ganaglay community in Liberia, Mamie Kpahn depends on the land and natural resources around the Blei Community Forest for her livelihood. Responding to increasing pressure over natural resources, the Liberian government has enacted legislation and processes to allow communities to self-identify, create communal governance structures, and obtain formal documentation of their community lands. Mamie notes that even though women often use the land more than men, they have been traditionally excluded from decision making around land in the community. After hearing about the importance of inclusive participation, she decided to run for her local land governance committee and was elected as chairperson. Today she participates in every step of the decision-making process related to the community land. Recently she attended a boundary harmonization meeting and helped resolve boundary conflicts between hers and a neighboring community. “As a woman, I was proud to be in this meeting and be part of the decision making to bring us together as neighbors. I am happy that the two communities can be in peace and work together. This will help our children manage our land in the future.”

USAID is supporting Liberia’s customary land formalization process in 44 communities in six counties. This includes strengthening the governance capacity of communities so that they are empowered to make inclusive decisions and enjoy the full potential of their formalized lands and resources. The project uses gender-balanced facilitation teams to sensitize communities about women’s roles in land governance and provides women like Mamie with technical knowledge on land governance. Formerly excluded from these decision-making spaces, women now account for 43 percent of committee members in these USAID-supported communities, and many have been nominated to serve in leadership positions.