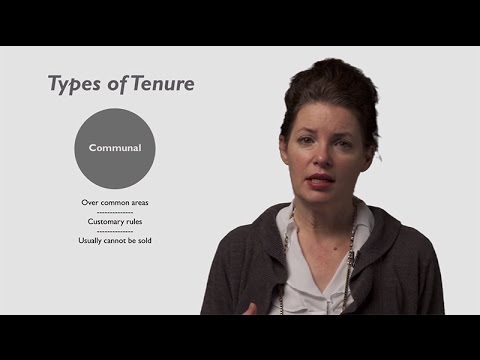 While all societies have land tenure systems, each system has a unique set of rules and no single system of governance can be universally applied. Tenure systems define who can hold and use resources, for what length of time, and under what conditions. These rules may be well defined or ambiguous and open to misinterpretation and exploitation. When both formal and informal systems exist within a society, tenure rules can be overlapping leading to confusion and insecurity. Land tenure may also vary by gender, ethnicity, class, and political affiliation.

Different land tenure systems have their advantages and disadvantages. Customary systems, which are often based on traditional, unwritten, and locally relevant rules about how to use and allocate land and resources, facilitate social cohesion, but they may not be able to withstand increasing pressure on land and resources both from within the community and from the outside (compared with statutory systems which provide written legal rules or written case law about these issues). Individual land ownership may put land to the most economically efficient use, but it may exclude disadvantaged populations, such as the poor, and limit state land management options. Public (or state) land ownership may withhold land for conservation purposes or public land management and facilitate more equal access to prime locations, but it may lead to poor land use and land management outcomes as a result of bureaucratic inactivity and corruption. For inclusive and sustainable land governance, it is important that land systems are evaluated holistically, to understand how and why decisions on land and natural resources are made, implemented and enforced in both formal and informal settings.

Security of tenure is the perception by people that their rights to land will be recognized by others as legitimate and protected in the event of specific challenges. People often feel secure when they have a full set of use and transfer rights of sufficient duration to recoup any labor and capital they invest in land or property and when they are able to enforce those rights against the claims of others. Some people will refer to a “bundle of rights” in land and resources. This bundle is composed of various “sticks” — each of which represents a right to use, manage or transfer the asset. Another important element of security is that people feel assured that they will be able to capture the benefits derived from those rights and related investments. The provision of security of tenure and property rights has become a major vehicle for economic growth, social development, poverty alleviation, and natural resource management. Security of tenure can be provided from a variety of sources: it may stem from a community and the user groups that form within it (e.g., water users, pastoralists, farmer groups); or it can stem from administrative user groups (e.g., districts organized around key assets) or from government and legal institutions within government. Therefore, we should not think of secure tenure as strictly formal or informal but acknowledge it as a broader range of systems.

Tenure security has become an essential part of a large programmatic push aimed at increasing inclusive investment in land, agricultural production, sustainable natural resource management, and the move toward market economies. Increasingly, efforts are focused on multiplying the effects of secure tenure and property rights from various sources. For several decades, efforts to provide secure tenure and property rights have specifically focused on land law, land titling and registration, land administration, and the redistribution or restitution of land. More recently, the development community has examined ways to expand secure land tenure and property rights by supporting efforts to recognize and respect customary rights to use, manage and allocate rights to land and resources as a means to contribute to both economic growth and sustainable natural resource management.

Learn more about land tenure and property rights (LTPR) on the pages below.