USAID’s Sustainable Landscape Opportunity Analyses (SLOAs) provide an overview of options available to reduce greenhouse gas emissions from land conservation, management, and restoration. SLOAs are created through a collaborative process with USAID Missions to help develop programming that aims to reduce carbon emissions and/or increase carbon sequestration. They provide an assessment of land-based climate mitigation opportunities at the national and sub-national level, reflecting the biophysical potential of the land, as well as potential priorities and constraints on different mitigation pathways.

To accompany the SLOA for Papua New Guinea (PNG), USAID has developed a new Geospatial Companion that can assist USAID/PNG in leveraging its SLOA findings for spatial planning, as described below. The Geospatial Companion is a visual tool that brings the maps and data included in the SLOA, as well as additional datasets as applicable, to life as dynamic resources that can be updated to reflect changes in information or priorities. Its user-friendly maps and data can be manipulated and combined to help decision makers visualize and identify where investments in land-based climate mitigation can be most effective, as well as help decision makers integrate climate outcomes with other development priorities. This Geospatial Companion can also serve as a model for the development of other SLOA Geospatial Companions in assisting USAID Missions and partners in leveraging SLOA findings.

The island of New Guinea hosts the third largest expanse of tropical rainforests on the planet, among other geographically diverse terrestrial and aquatic environments. PNG comprises the eastern half of the island and is the largest Pacific Island country both by landmass and population. The country has pledged to completely end deforestation by the year 2030 to combat climate change. At the same time, it is undertaking large road and electricity infrastructure projects to spur economic growth and address widespread poverty.

Understanding where to prioritize investments in PNG to most effectively make advancements in land-based climate mitigation efforts is complicated. There are a wide variety of land governance systems that exist for different types of land resources—from protected areas to agriculture concessions. Furthermore, among the country’s population of over 10 million people, more than 850 languages are spoken and there are more than 600 distinct tribes, each with their own traditional land governance rules. 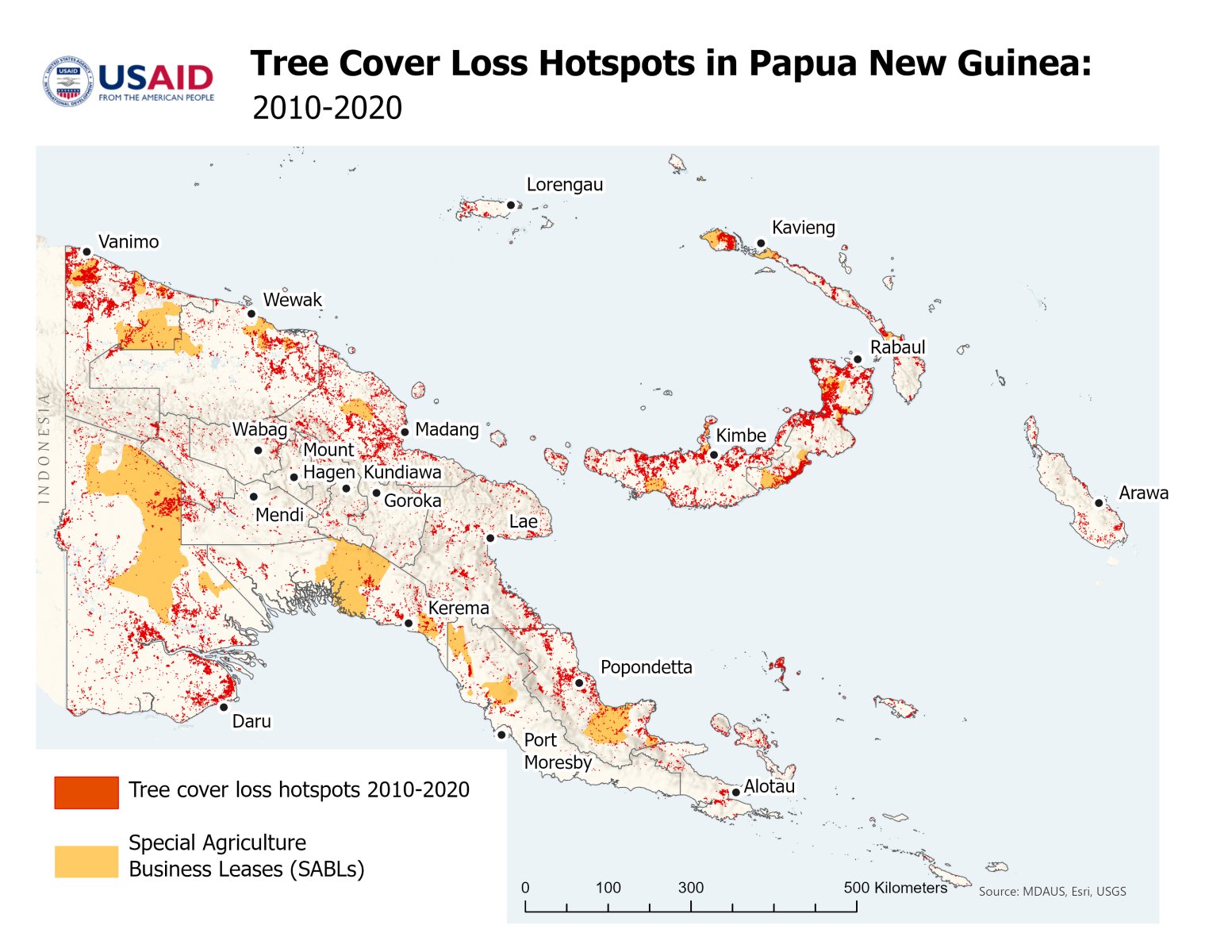 To effectively support both PNG’s economic development and the country’s international commitment to protect its forests, USAID’s Geospatial Companion integrates and analyzes land-based climate mitigation datasets together with USAID geographic and programming priorities. It features maps of datasets that are referenced in the PNG SLOA and also includes additional information, such as the forest cover loss “hotspots” shown in Figure 1.

Looking at the SLOA data alongside complementary datasets allows users to visualize trade-offs or opportunities to develop programming that combines emissions reductions with other priority outcomes, such as biodiversity conservation (Figure 2) or infrastructure development. Dedicated climate change mitigation programs, as well as contributions from other development sector programs, are necessary for achieving USAID’s target of reducing, avoiding, or sequestering six billion metric tons of carbon dioxide equivalent emissions by 2030.

The Geospatial Companion data and maps are part of a larger package of support that can be provided to USAID Missions. The scenario map shown in Figure 2 is one example–iIt is based on a spatial model that considers multiple criteria to identify locations where the potential for both climate mitigation and conservation benefits are highest. 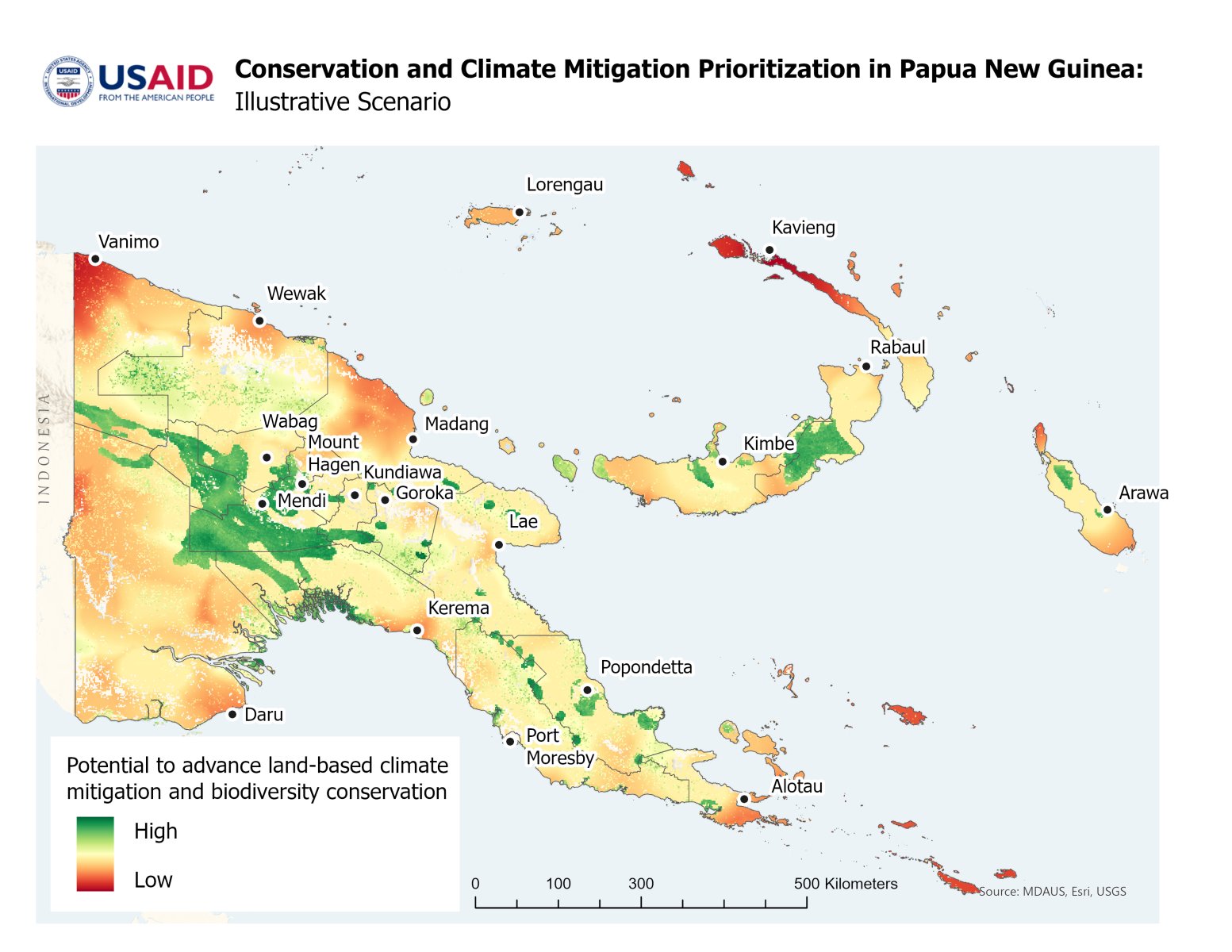 Figure 2: By combining and strategically weighting different datasets in a spatial model, locations are identified where the potential for both climate mitigation and conservation benefits is highest.
Credit: USAID

The Power of Geospatial Information
Understanding the geographic scope of where the most effective mitigation opportunities might exist under a variety of scenarios can be extremely complex and difficult to conceptualize. In addition, a number of important local factors that are critical to sustainable and resilient development programming could be overlooked without proper analysis. Maps and spatial data are powerful tools to visualize this kind of complex information in space and time.

The SLOA Geospatial Companion helps guide USAID decision-making and is designed to improve the efficacy of USAID programming related to land-based climate mitigation and biodiversity conservation on the ground. Its scenarios can help USAID Missions and operating units identify pathways for reducing emissions while also responding to other development challenges. In PNG, the Geospatial Companion shows at a glance where climate mitigation potential, biodiversity, and land rights intersect. In other regions, governance, health, livelihoods, population, agriculture, water stress, energy, infrastructure, or other types of data might be used to determine further opportunities for increased climate action.