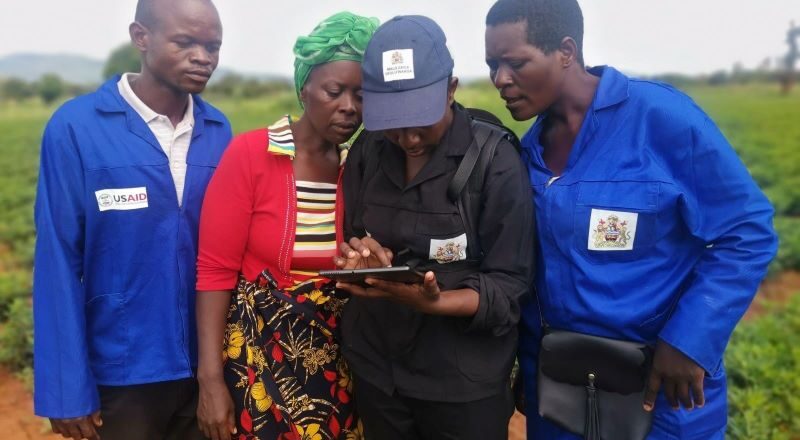 “In our society women play a crucial role in terms of home-building and family development and these roles are unfortunately not recognized in rural regions. The government is trying to address women’s rights issues where we do not trample culture, but explain that women should be encouraged to be registered with the land because the woman is responsible for the home and the family and relies on land to do this.” - Charles Vintulla, Ministry of Lands Spokesperson.

“Here, men want to control everything and don’t allow women to talk. If we are aware of our land rights we can act and defend, and if we get divorced, we can still rely on the land to continue feeding our children.” -Margaret Dyson, landowner in TA Mwansambo

Margaret Dyson, a single mother of three, inherited her four-acre farm from her parents, who were granted the land by the village head person when they moved to the Traditional Land Management Area (TLMA) of Mwansambo 30 years ago.

Since then, her family has relied on natural boundary markers such as trees and streams to define their property and keep their land separate from adjacent farms. As local populations grow and land becomes increasingly scarce, these natural boundaries that have worked for decades may be removed or become less effective. As a result, formally documenting land ownership has become a critical part of the government’s strategy to promote inclusive sustainable development.

In Malawi, 70 percent of the population lives on customary land, held by communities and administered by traditional leaders, as smallholder farmers. Less than 10 percent have some form of land documentation. These rates are significantly worse for women due to gender norms that view men as the default heads of households who wield decision-making power over valuable assets like land. Though many parts of the country are matrilineal, meaning that land is passed down from mother to daughter, male relatives often still control day-to-day decisions about land use. Furthermore, though TLMA Mwansambo is matrilineal, it does not follow the traditional custom where men who marry move to the land of their wives’ clan; instead, women typically move to their husband’s village after marriage. Since they are assumed to have land rights in their own village under the matrilineal tradition, they are given no rights to the land in their husband’s village.

Because navigating these customary land rights traditions can be challenging, documenting and formalizing these rights is important. Land documentation not only provides rural populations with greater tenure security, it creates incentives for them to invest in their farms and can provide a source of collateral for expanded access to finance. Land documentation can also reduce land conflict and promote gender equality.

Following the 2016 Customary Land Act, the Government of Malawi launched several land documentation pilots across the country, permitting customary landholders to formalize ownership. In TLMA Mwansambo, the USAID-funded Integrated Land and Resource Governance (ILRG) program is partnering with the Ministry of Lands to roll out the country’s most ambitious customary land formalization campaign to date, with an explicit focus on women’s land rights. Using participatory methods and socially inclusive approach , the land documentation campaign is targeting outreach to approximately 40,000 people. The activity expects to document upward of 10,000 land parcels in under one year.

The land demarcation process is gender-responsive, ensuring that both women and men are able to participate at each stage.

Following a comprehensive gender assessment in TLMA Mwansambo, ILRG sensitized all stakeholders on gender and social inclusion (GESI) issues before and during the land registration process and developed a series of tools to guide GESI integration across all steps of the process.

Over the course of eight months, teams of university graduates visit each village to carry out the land documentation work. After holding community sensitization events, they physically walk the boundaries of each parcel with landholders and use GPS enabled mobile devices to map the precise coordinates. Once the data are collected, a village map is produced and posted in a central area for community members to review and bring any corrections or objections forward. These sessions are held during times and locations that are accessible and safe for women to participate. Once maps are validated and finalized, the local government issues land titles to customary landholders.

“We know that we are gender focal points in the land documentation process,” says data collector Sylvia Kasiaya, 28. “When a man wants to only register his name to the land, we ask ‘What about your wife?’ They often say ‘No, she has her own land’, so we push back and inform them about the advantages of joint documentation, such as ‘What if you die, how will your wife and children survive?’ Sometimes it works and we see very little resistance.”

ILRG is also promoting shifts in harmful gender norms that hinder women’s land rights through a series of workshops and dialogue sessions. Now, women and men have opportunities to sit together to reflect on harmful gender norms—such as local marriage traditions which give women no rights to land in their husband’s village—and discuss how to change them in order to promote equal land rights, equal decision-making over land, and equal sharing of benefits from land. ILRG is also holding gender norms dialogues with traditional leaders like village head persons, who tend to be men, to identify the harmful gender norms that might hinder women’s land rights and devise concrete strategies to initiate change.

Another way women can be empowered is through engagement in land institutions. The 2016 Customary Land Act creates Customary Land Committees (CLCs), a group of community members elected to help oversee and resolve disputes that occur within the local land documentation process. CLCs are critical to guide data collectors, land surveyors, and government officials in their villages. By law, the CLCs must be gender balanced. ILRG is improving leadership skills for women elected to these bodies so they can meaningfully participate.

Rose Zuze has four children and was elected as a CLC member in Group Village Mwansambo. She accompanied Margaret and her neighbors to define the boundaries of her property.

“Single mothers have no power, so they need the CLC to defend their rights. Since I am a woman, I know their problems. In addition, women like Maragaret are empowered by the CLC. They see women in positions of leadership and believe that if I can be on the CLC, then they can also be in positions of power.”

These efforts help ensure that women’s names are included on land titles, which aligns with the joint objectives of the Government of Malawi and USAID to advance gender equality in land rights as a pathway for women’s empowerment.

“I put the farm in my name with the three children on the document,” said Margaret Dyson. “It is important because it gives us protection from eviction. With this document, I can prove this is my land.”

The campaign in Mwansambo is establishing the precedent for a socially inclusive and gender-responsive approach to land registration. This scalable approach may influence how the government carries forward the important work of ensuring secure land tenure as a pathway for sustainable development, building on Malawi Vision 2063’s goal to fully harness the potential of land as a catalyst for economic self-reliance, and the USAID/Malawi Country Development Cooperation Strategy to support gender-equitable and accountable development.