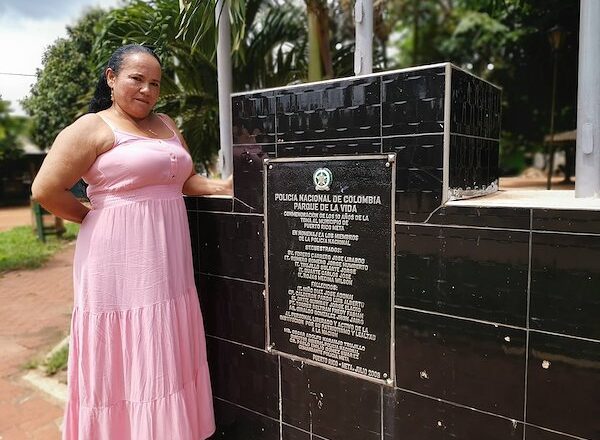 "For land, one must understand the connotations and emotions of a family who has received a property title after so many years of informal ownership. I spoke with a 70 year old man who has been unable to legalize his property for more than 40 years. He told me excitedly that he finally felt that his plot of land was his."

As she walks, Elizabeth Ríos seems to carry images of the guerrilla and paramilitary violence that shook the municipality of Puerto Rico for much of the 1990s and 2000s.

“We had security problems,” says Ríos looking off into the distance, recalling times she doesn’t know how she survived. “One day there were two dead, another day, three. The town was divided until 1999, when the guerrillas took control.”

It was on July 10, 1999, when some 2,000 guerrillas of the FARC’s now defunct 42nd Front stormed and besieged the entrance to Puerto Rico and surrounded the police station, which at the time was staffed by about 30 policemen.

“Those policemen were like cannon fodder,” Ríos still recalls with fear, evoking the images of horror in her mind. “The guerrilla shot them with rifles and threw gas canisters at them.”

The bloodshed ended after a 40-hour siege of the police station leaving five policemen dead. The remaining tired 28 policemen gave up when they had no more ammunition or food and were kidnapped by the insurgents.

For Ríos, who has been a member of the Puerto Rico municipal council for 15 years and knows the history of the conflict in the municipality, the FARC takeover also destroyed the local branch of the Caja Agraria, a gas station, and left the town’s population without electricity. To never forget this difficult chapter, with the support of Ríos and the council, the battle site was converted into a memorial park in 2013. The Parque de la Vida y de la Paz, as the memorial park is officially known, has a monument commemorating the fallen policemen and those who were kidnapped during the three-day siege. But the parcel of land where the battalion was once located has never been titled in the name of the municipality. In fact, hardly any public properties in Puerto Rico are titled. Following the 2016 Peace Accords signed with the FARC, formalizing public properties became a priority. Clear land rights are necessary for rural development investments. With support from USAID, through the Land for Prosperity program, Puerto Rico titled the parcel where the park stands. The procedure is relatively simple, but no less important.

In 2022, USAID partnered with Puerto Rico leaders to create a Municipal Land Office. In its first six months, the local land office, which is embedded under the municipality’s Secretary of Planning has identified dozens of public parcels in the municipality that cannot receive national or regional funding without a registered land title. “Legalizing property is fundamental. If not, we find ourselves in this bottleneck that, if they are not legalized, no investment can be made in them. Historically, no one cared about legalizing property, and the land administration process was poorly executed. This is an example of a mistake from the past that brings us consequences today.”-Diana Navarro, Mayor of Puerto Rico In the Municipality’s Name

“To have a local land office in the municipality, with the support of development partners, is very important,” said Mayor Navarro. “We still need to title 43 schools, four health centers, and another 51 community spaces.”

In addition to legalizing and titling the municipality’s public properties, the Municipal Land Office can title private properties in urban areas. The office’s staff includes land surveyors, lawyers, and social workers who raise awareness and promote a culture of formal land ownership. For the 12,000 inhabitants of Puerto Rico, the office represents a place to go with questions and learn about the land formalization processes. This year, Puerto Rico has already delivered the 32 land titles for urban parcels, all free of charge. The initial goal is to title 400 properties.

“Before this, the measurements of properties were never accepted by the IGAC’s cadastral offices because of differences, and a cadastral correction process had to be done,” says Secretary Ruiz. “Now we have the capacity to get it right.”

In the Meta Department, USAID is supporting a handful of land offices that have already titled hundreds of properties, including in neighboring Puerto Lleras and Fuentedeoro.

“I already knew about the Fuentedeoro Land Office,” Ruiz said. “I knew Puerto Rico would give strong results with an office here. It has been very well received in the municipality.”

Besides providing land tenure security for families who have lived in Puerto Rico for decades, among other benefits, landowners can access credit and government subsidies to improve their homes or for agricultural projects in rural areas since financial entities are more likely to lend money to people who have a registered property title.

“Now it is essential to legalize property in rural areas”, adds Mayor Navarro. With the resources that come from the payment of the property tax of the legalized properties, the Mayor’s Office will be able to raise money through property taxes to improve basic services in the municipality. Puerto Rico has already delivered the 32 land titles for urban parcels and aims to title 400 properties.

This blog is cross-posted from the Land for Prosperity exposure site.