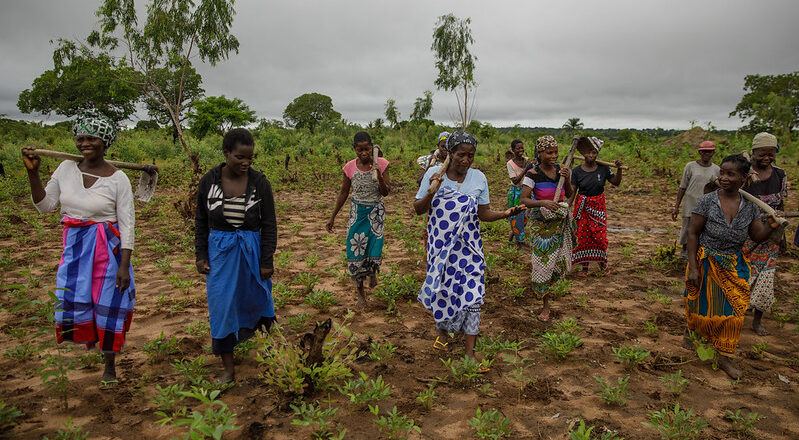 In Mozambique, community land rights are recognised under the country’s progressive land laws. Yet many private-sector companies also hold long-term leases on wide swathes of land that once belonged to communities. Here, Sarah Lowery of USAID’s Land and Resource Governance Division discusses how USAID partnered with agroforestry firm Green Resources to help it responsibly divest its land-use rights back to local communities.

Mozambique has a complex history of land tenure that dates back to colonial times. Some private companies were given large tracts of land for development under Portuguese rule and, after independence, those companies retained use rights to that land. Other companies have been granted land concessions in more recent years. Conflicts surrounding these company lands, including the country’s vast plantation forests and the land upon which they stand, have increased over the past 10 years. Although all land in Mozambique is officially owned by the state (as is common in most of sub-Saharan Africa), the country recognises the land-use rights of communities and individuals acquired through customary systems and good faith occupancy, and it allows communities to register those rights. However, over 75 per cent of rural land in the country is unregistered, and millions of rural people are left without secure land tenure. Communities, especially women, are vulnerable to the outcomes of decisions made by government and community leaders who negotiate and make deals with companies, including forestry firms, to use or lease the community’s lands (often without much input from community members).

A recipe for local mistrust

By 2019, the amount of scattered landholdings Green Resources had acquired in Mozambique had become a liability and too onerous to manage. The company decided then to disinvest, or relinquish, its land rights to more than 230,000 hectares. Much of the land was never developed into forestry plantations, but some are high-value parcels with existing tree plantations and infrastructure.

Not surprisingly, this process of ceding land-use rights can be fraught with attempts by various parties to grab land or resources. The company’s board was eager to ensure that the return of land was done in an inclusive manner that benefitted local communities. Green Resources wanted to prioritise an approach where local communities could document their rights to the land in parallel with the company’s disinvestment efforts and also ensure that communities were prepared to manage the land.

Over 350,000 people stand to benefit from the land being disinvested by the company across Nampula, Niassa, and Zambezia provinces. To successfully bring to fruition this land disinvestment process that protects communities’ rights, USAID partnered with Green Resources and a number of local civil society organisations (including iTC-F, ANAM Niassa, and Terra Nossa) with expertise in land-tenure documentation.

The MAST approach goes beyond delimitation to make sure that the communities can manage their land with transparency and equity, emphasising socially-inclusive and gender-equitable outreach efforts to ensure that women, youth, and other marginalised groups are represented and actively participate and benefit. High-value resources, including standing timber, are transferred to the community associations who are charged with responsible management.

In addition to USAID-supported training on land governance and natural resource management, Green Resources is providing communities with technical support to manage eucalyptus trees on high-value parcels so these resources can be a renewable source of community wealth. Communities that have valuable timber plantations and infrastructure on their land will also receive follow-on support to sustainably manage these resources and run viable businesses.

Impacts and next steps

To date, Green Resources has disinvested from 230,000 hectares of land, and USAID and local civil society organisations have helped 86 communities obtain or apply for certificates of community land rights that provide them with secure land tenure. The certificates cover over 466,000 hectares, including both lands renounced by the company and other land that communities historically occupied, benefiting over 200,000 people (52 per cent women).

Some communities adjacent to Green Resources’ land had previously been delimited, and work in these areas has focused on establishing and training community land associations. In total, the USAID-Green Resources partnership has helped 125 communities establish land associations to manage and make decisions regarding communal land and natural resources. Women make up 43 per cent of the associations’ founding members, ensuring their needs are considered now and in the future.

For communities, land delimitation has led to a decrease in conflict. According to Régulo Canhaua, a traditional leader in Mecuburi, Nampula Province:

There used to be community conflicts about land limits and use of the land. Now people know where each village begins and ends.

Having community associations increases accountability and transparency in the use of resources, preventing a small group of people from selling resources for their own benefit. As communities learn to manage newly held natural resources and pursue sustainable resource-based livelihood strategies, they will be able to generate income for long-awaited community development projects such as bridges, clinics, and schools.

This disinvestment initiative is poised to be a win for both Green Resources and communities. The company hopes this effort will help repair broken relationships with and within communities and make its current landholdings more manageable. The communities stand to benefit from the newly relinquished land and existing resources by asserting and formalising their rights to these holdings, reducing land conflicts, and investing in sustainable land and natural resource management practices.

As companies around the world audit their land-based investments and responsibilities to surrounding communities, the concept of responsible land divestment may become increasingly compelling. Whether divesting entire properties due to business closure or downsizing landholdings for other reasons, the process of allowing local communities and stakeholders to participate will reduce opportunities for corruption and empower communities to assert their rights and proactively benefit from their land. These efforts do require enabling policy conditions that allow communities to register their rights to divested landholdings, which necessitates continued engagement with national governments to promote inclusive land governance systems.

For a more in-depth look at the USAID’s private sector partnerships in the land and natural resource space, see the Responsible Land-Based Investments Case Study Series.