“It is not only men who need to be concerned about getting the title to their property. Women are also part of this process, as both they and their children become owners of the property.”
Belcy Veloza, Community leader from Sardinata

In Sardinata, Colombia, women are the driving force behind land formalization and are the main beneficiaries

For the women of Sardinata, Norte de Santander, having a land title had been unimaginable for decades. Their dreams of owning property were crushed every time unscrupulous people arrived with false promises.

“People came here and told us things, made us spend money, but in the end, nothing ever came out of it,” according to Belcy Veloza, a woman from Sardinata’s El Baho barrio.

In Catatumbo, a complex region in Norte de Santander where Sardinata is located, half of the properties are informal. This fact—coupled with the large presence of illicit crops, armed groups, and anti-personnel landmines—has hindered the arrival of the peace this region has been craving for years. In addition, a limited presence of the State has resulted in a community who distrust government actions to combat violence and promote economic development. In 2021, when the Municipal Land Office (MLO) team arrived in El Baho to begin the property characterization process, they initially contacted Hernando Gómez, Belcy’s husband and vice-president of the Community Action Board. At that moment, inspired by the possibilities of formalization, Belcy volunteered to join the team in visiting each of her neighbors’ properties—neighbors she has known since she and her husband arrived in the area 25 years ago.

Since then, Belcy has played a leading role from start to finish in the urban land formalization process in Sardinata, which has turned 140 families into legal owners of the homes they have lived in for years.

“It motivated me because I saw that it was a serious project—they weren’t trying to pull a fast one on us. That is why I also wanted to be part of the Multipliers Network, because I wanted to be a guide for the program, for the MLO, and help many families in my neighborhood,” added Belcy.

For her, the process does not end with a property title. Learning about the benefits of maintaining formality in land transactions—both for citizens and for the municipality—inspired her to invite her neighbors to be part of the Multipliers Network. Belcy wanted to spread her knowledge of the culture of formality to the entire community, especially among women.

“It is not only men who need to be concerned about getting the title to their property. Women are also part of this process, as both they and their children become owners of the property.”
Belcy Veloza, Community leader from Sardinata

Sardinata is one of the municipalities prioritized by the Government of Colombia and USAID to implement the massive land formalization strategy in the country. Launching the MLO in Sardinata was the first step on the road to formalization in this municipality. USAID and the municipal mayor’s office launched the MLO in October 2020, and over one year later, it has already shown results.

“The USAID Land for Prosperity Activity is one of Sardinata’s great achievements in recent decades. People have the possibility of obtaining a property title that will guarantee them access to credit. Registered land titles provide them legal security in terms of the possession of their properties.”

The mayor is aware that a successful formalization strategy in the municipality would not have been possible without the support of the community and, to a large extent, the women. For years, Sardinata had been hoping to achieve massive land titling, and he wanted to be remembered as the mayor who supported this initiative.

“Women’s support in this process is invaluable. Mrs. Belcy was an icon in El Baho for the support she gave to the Municipal Office. When she received that property title and held it in her hands, I remember seeing the happiness in her face. Women have played a very important role in this project,” the mayor emphasized.

More and more women citizens are becoming interested in land issues in Sardinata. Of the 470 women in Catatumbo who have been trained on the culture of formality, 390 are from this municipality. Interest in claiming their land rights has grown so much that 102 of the 140 urban property titles issued by the MLO are in women’s names.

Training women on the culture of formality helps many more of them become owners of their own land, take advantage of opportunities to increase their income (not clear how), and thus improve their children’s nutrition and their families’ living conditions. Keeping land in the formal market provides sustainability to these households. 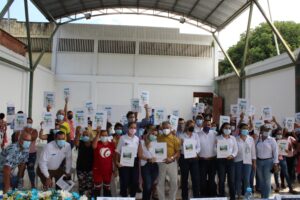 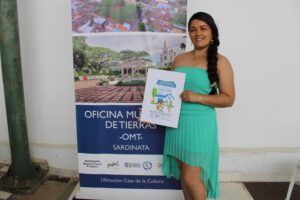 7 of 10 urban property titles issued by the MLO are in women’s names.

Deploying this formalization strategy in the rural areas of a municipality that has 8,000 rural properties—half of them informal—is an ambitious task. In addition, there are 4,602 hectares of illicit crops in Sardinata. This results in the need to adapt the parcel sweep for formalization using methodologies that promote voluntary crop substitution. This way, the communities themselves will be the most interested in developing licit activities on the lands that will eventually become their property after formalization.

“With the parcel sweep, the municipality’s finances will be improved, and the community will be even more rooted in their properties. We are a pilot project in Norte de Santander, and it was USAID and the national government’s decision to support us as a municipality. Farmers should be aware that with the property titles they receive, they must use their land for legal, licit economic production. Property sweeps are costly, and decades ago, the thought of this was not even a remote possibility,” stated Hermides Moncada.

Property titles that were once a dream for many of these women are now a reality.