"There is an important relationship between improved women's land rights and a better society. Since the essence of USAID’s work is to ensure an improved and more secure society, the obvious choice must be made to enhance women's secure access to land and resources."

Tell us about yourself. 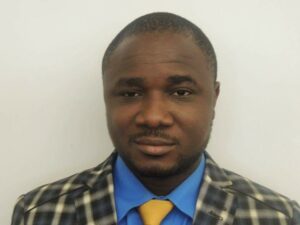 My name is F. Mulbah Zig Forkpa, Jr. I am currently the Land Governance Specialist at USAID/Liberia. I have served in this capacity for five years, helping to implement the Mission’s land and resource governance programs-first the Land Governance Support Activity, a  $15.6 million activity which ended in August 2020, and now the Land Management Support Activities, a $9.4 million activity which continues until 2025. I also serve as one of the focal persons on gender in the Mission’s Office of Democracy, Rights, and Governance. I am a proud graduate of USAID’s inaugural Land Advisors Program. I hold both BA and LLB degrees from the University of Liberia. I am finalizing my LLM in Transnational Criminal Justice. Throughout my LLM studies, I have endeavored to explore the linkages between land reform and transitional justice, as well as how land reform can sustain peace and prevent the recurrence of conflicts that were primarily provoked by land disagreements.

Why are women’s land rights and resource governance important to your work? And to other USAID development work?

Liberia has a predominantly rural population that primarily derives its livelihood from land. This means that land is placed at the center of everything that matters, including social and economic security. Where insecure land and resource governance affect an entire population, women tend to suffer the most because of the critical role they play in farming and caring for the family. There is an important relationship between improved women’s land rights and a better society. Since the essence of USAID’s work is to ensure an improved and more secure society, the obvious choice must be made to enhance women’s secure access to land and resources.

What are some of the biggest challenges in helping women secure land rights and what are some things being done to overcome them?

To the best of my knowledge, all women’s land rights assessments have shown that despite the central role women play in agricultural production, their rights and access to land are often hindered. In a male-dominated society like Liberia, these hindrances have long roots and have evolved as an acceptable social norm. In most cases, discriminatory social norms are supported by existing legal frameworks that relegate women’s land and natural resource rights to a status that is less important than those of men. In instances where discriminatory gender norms are outlawed through formal laws, the entrenched adherence to those norms, as well as powerful men’s unwillingness to lose their control over land resources makes it extremely difficult to enforce new reform laws. To offset these challenges, we have ensured that gender issues are constantly highlighted in policies and regulatory formulations, in order to streamline and amplify the gender equality provisions of the 2018 Land Rights Act of Liberia. Our land and resource governance programs have constantly embarked on strong behavioral change education and publicity campaigns. In these endeavors, we have collaborated with, and empowered, influential stakeholders including traditional leaders who are now championing the fight for gender empowerment. These strategies must become sustainable and live on even after donor support ends. In that regard, the USAID supported the establishment of a Gender Unit within the Liberia Land Authority (LLA), the central land regulatory agency in Liberia. The Gender Unit is driving the gender empowerment agenda of the LLA.

What are some of USAID’s successes in the area of land rights?

USAID has supported the enactment, establishment, and operationalization of the LLA. Initially, land services were scattered across different government entities and also marked by huge bureaucracy. The LLA has now become the single one-stop-center to access land services. USAID has ensured that the LLA has the proper tools to oversee the implementation of the Land Rights Act adopted in 2018 as the country’s primary land reform agenda. To do so, a USAID-supported consultant worked with the LLA in 2019 to create an implementation strategy for the Land Rights Act. The strategy has been effective, making it possible for stakeholders to avoid duplication in programming aimed at safeguarding rights. I firmly believe the most significant provisions of the Land Right Act are those that require the formalization of customary land. These provisions restored customary land rights, which were denied for over 100 years, and placed women’s rights  on par with those of men, both in terms of land access and management. These customary land formalization provisions have been piloted by USAID in communities across three of Liberia’s 15 counties, and lessons learned are being rolled out.

Let me take the moment to talk briefly about the USAID/Liberia Land Management Activity, awarded in July 2021 with the intent to support at least 100 communities to own and manage their customary land efficiently. It is a continuation of USAID’s investment in the Liberian land space and has a component that places exclusive emphasis on empowering women and minority groups to participate in decision-making around land by getting elected to governance bodies. The program encourages different donors to co-locate and leverage efforts. Because of these opportunities, the communities who will secure their land rights through USAID’s activity will likely utilize their titles for various private sector commercial engagements.