When asked what winning the CRB elections means to her, Harriet said; “It’s a new world for me, I feel happy, confident, and motivated! I work within this big organization and speak for people. I am showing my community what I can do and how I can build positive relationships. I have become capable!”

“On election day, I believed I could win but also doubted that my community would choose me over a man.”-Harriet Mupeta, Mukungule CRB Board Secretary 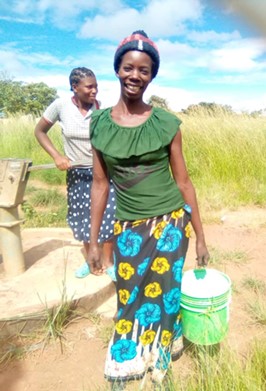 Harriet entered the community leadership scene through the Village Action Group (VAG) election. In order to be eligible to join the CRB a candidate, one must first be elected to a local-level Village Action Group. In October 2020, she won the Mwansabamba VAG election in a landslide and became the VAG Chairperson. In November, she was elected as the CRB Board Secretary for Mukungule CRB. Like many women of her community, she never thought of herself as a community leader who could represent the interests of others, but all that changed when the Community Liaison Assistant (CLA) went to her community to talk about gender equality and women’s rights.

“Before the meeting I knew very little about the role of the CRBs and that as a woman I could be involved. When I heard that Chief Mukungule was asking women to join the CRB, I decided to try because I knew the Chief’s word is respected.”

To encourage women to participate in community governance of their resources, USAID partners worked with traditional leaders and community members prior to the elections to break through gender barriers and promote acceptance of women’s role in leadership. Seven women in the VAG were mobilized and given information about community resource management and training on skills to go through the election process.

A housewife, Harriet said, “I was worried about my husband’s and my relatives’ reaction, but after negotiating with them they supported me. It was the other men in the community that gave me a hard time. They kept passing offensive comments like I was not capable and wouldn’t get anywhere.”

The skills training focused on working with women candidates on negotiation and communication skills, self-confidence, public speaking, campaign strategies, and networking. Most of the women that won the election did not have the financial resources to campaign but relied on family connections and their reputation in the community. Women were often seen as willing to serve in positions of leadership for the greater good, whereas men were perceived as pursuing their own interests and benefits.

“At first, I used to be affected by the mockery of men, but one day after a meeting, a group of women who witnessed one of the incidents told me that I was kind and loved by people and that they would support me to win. That changed everything for me!

When asked what winning the CRB elections means to her, Harriet said; “It’s a new world for me, I feel happy, confident, and motivated! I work within this big organization and speak for people. I am showing my community what I can do and how I can build positive relationships. I have become capable!”