The town of Caceres was already living in a sort of lockdown long before the coronavirus became an international health crisis. Just a year ago, a self-imposed curfew had curtailed business hours and streets were empty for most of the day and night. Territorial disputes, heedless violence, and constant threats have kept Caceres’ inhabitants always on the verge of abandoning their homes.

Official figures claim there are 30,000 people living in this historic town, founded over 500 years ago on the banks of the Cauca river in Antioquia, but over the last two years, thousands of those people have left the municipality, unable to face another day of uncertainty. And although these conditions would be ideal for containing a highly contagious virus, they do little to promote rural development, reduce crime, and improve the quality of life.

In addition to being one of three municipalities prioritized by high-level dialog between the U.S. and Colombian governments, Caceres is also a PDET municipality within the Bajo Cauca region. Thus, it is the target of coordinated investments from donors and government entities.

In today’s Caceres, land administration is nearly nonexistent. Nearly 80% of the municipality’s 11,000 parcels are informally owned, and unregulated gold mining has become the municipality’s principal lure for crime syndicates. Also, illicit crops still cover about 1,100 hectares in the municipality. As threats continue to affect rural farmers, formal documentation of land ownership is more important than ever.

In late 2019, the USAID-funded Land for Prosperity Activity began operating in the municipality and offering innovative actions that can increase land security, prevent displacement, and create an environment for sustainable rural development. The mayor of Caceres accepted the challenge and quickly mobilized a team to help create Caceres’ first Municipal Land Office (MLO). Here, a localized team of experts works directly with judges and the National Land Agency (ANT) to formalize public properties and urban properties. The MLO provides valuable information to citizens, promotes a culture of formal land transactions, and is essential in strengthening the coordination between national and rural leaders. 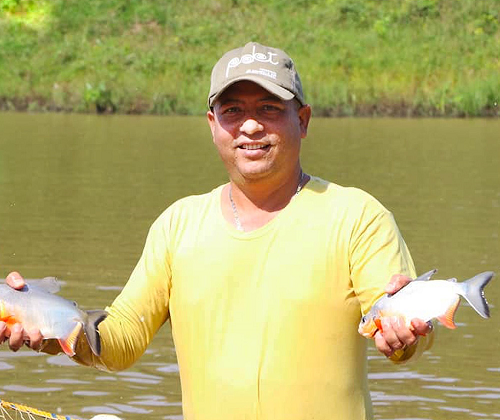 “Land formalization is a way to stimulate the economy, generate a culture of peace and legality, and allow communities to put down roots. Formalized property guarantees legal security and makes it easier for farmers to access credits, subsidies, and government programs to finance their agriculture projects.” -Mayor Juan Carlos Rodriguez

Building on the Mayor’s motivation, in 2020, USAID facilitated a partnership aimed at increasing resources to formalize urban and rural plots and create incentives for illicit crop substitution. Through a memorandum of understanding, the ANT, Proantioquia, Antioquia’s regional government, the municipality, and USAID agreed to increase local and national coordination and enhance the private sector’s role in rural development. With a broad spectrum of partners, farmers who substitute coca for new crops like cocoa, rubber, or ranching, will have the opportunity to use land titles to access financial services and investment capital.

“By partnering with USAID, our municipality can strengthen land governance, increase resources mobilization, and make larger investments in the communities,– Juan Carlos Rodriguez, Mayor of Caceres

The memorandum will allow the government to test the concept of using land titles as an incentive for illicit crop substitution while strategic private public partnerships mobilize resources for new, licit economic opportunities. In addition, with USAID’s support, the ANT will work with the regional and municipal government leaders to formalize parcels where public entities operate, such as schools, health centers, and parks. Property titles for public lands allow local governments to pull down national-level resources to improve public services like education and health.

“When mayors know how many properties there are, how many people live there, and what projects they can implement, they can plan for the development of their municipalities and improve their citizens’ quality of life.” -Myriam Martínez, Director of Colombia’s National Land Agency

The first step of the Cáceres MLO is to perform a municipal-wide diagnostic study of the municipality’s parcels, including the location of public properties which are untitled, and what services are being provided on each parcel.

Since 2015, USAID has established 20+ Municipal Land Offices in Colombia.