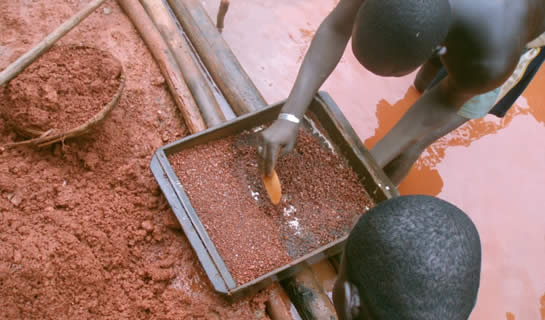 While it is no secret that the U.S. is a staunch supporter of the Kimberley Process (KP), few know just how deep its support runs. Four years after the U.S. passed the Clean Diamond Trade Act and helped create the Kimberley Process, the United States Agency for International Development (USAID) sent an assessment team to the Central African Republic (CAR) to investigate ways in which it could help the country better comply with the KP objectives. The assessment resulted in the creation of the Property Rights and Artisanal Diamond Development (PRADD) program, a joint USAID and U.S. State Department initiative launched in CAR in 2007 and in Liberia in May of 2010. “It was a pilot approach to try and clarify ownership rights,” said a USAID official close to the project. The creation of PRADD, explained the USAID official, was mainly to address the issue of “miners not having secure rights to the land they were mining on, and not properly recording their activities.” The project has two main goals: “First, we want to increase the amount of diamonds entering the legal chain of custody to comply with the KP, and second, we want to improve livelihoods of artisanal diamond communities.”

To achieve these goals, PRADD educates miners on the diamond industry, strengthens their ability to value their stones, trains them in other sustainable economic activities and works with governments to clarify and formalize property rights and related mining activities. The program runs on a U.S.–funded budget of $2.5 million, split roughly between CAR and Liberia, and is implemented by Tetra Tech ARD, a Burlington, Vermont–based environmental engineering and consulting firm.

CAR Successes
While it is too early to gauge PRADD’s effectiveness in Liberia, the program has made a lot of headway in CAR since its founding in 2007. In that country, according to USAID, PRADD has helped 1,525 artisanal diamond miners secure their property claims with the help of community validation and GPS mapping in the two diamond-producing provinces of Lobaye and Sangha-Mbaere.

PRADD has also geo-referenced 1,866 mining sites, and plans to transfer its database of these sites to the country’s Ministry of Mines, Energy, and Hydrology (MMEH), while training its staff in IT tracking techniques. USAID claims that these property right improvements have almost entirely eradicated land disputes in the project areas, which were at a high of 142 when the program started in 2007.

PRADD’s relationship with the CAR government is also strengthening, and has led to the government following some of the program’s advice, like lowering its 2011 artisanal mining licensing fee by 36 percent. More and more miners are also obtaining licenses. According to USAID, in the Province of Lobaye, the proportion of miners bearing an official license has increased from 5.1 percent in 2009 to 9.7 percent in 2010.

All of this bodes well for the government’s coffers. According to the Regional Directorate’s official figures, legal diamond production doubled by carat weight since 2007, rising from 4.1 percent to 8 percent, which translated into an extra $45,200 in export tax revenue for the CAR national treasury.

Community Outreach
The project’s main successes, however, are at the community level, where it helps foster economic diversification. “There have to be economic activities to rely on other than diamond mining, primarily because diamond mining is too much of a boom-and-bust industry,” observed the USAID official.

Since its start in CAR, PRADD has created 194 local associations that participate in a wealth of economic activities, including some targeted toward women, like soap making and tropical plant grinding. One of the most successful community development initiatives, continued the USAID official, was “to introduce miners to fish farming, so they can convert their mine pits into an alternative source of income.” By March 2011, of 193 reclaimed, exhausted diamond mines in the project areas, 102 had been converted into fish farms, while 91 were turned into fruit tree plots and vegetable gardens. The project has also had success in its public relations push to educate and inform the CAR public about responsible and sustainable mining. Since 2007, PRADD has launched 374 programs on artisanal mining in print and broadcast media throughout the country, and has spearheaded a national public awareness campaign tying the protection of the environment to increased income. According to a USAID project survey, the campaign has led more than 80 percent of miners to pledge to rehabilitate their exhausted mining sites.

Rough Road to Success
All of these successes have come with their fair share of challenges, especially in the early stages of the project. “Initially, building trust with the communities we were working in was very difficult — there was a lot of skepticism when we started four years ago. But when you work with these communities on a regular basis, you can build trust,” the USAID official said, adding “now they are very supportive of the program, and even the government itself has adopted the PRADD methodology.”

Gaining access to and overseeing mining sites was also particularly difficult in a region that has poor infrastructure and mobile communities. “These mining sites are in very remote areas — one site in CAR is a ten-hour drive from the capital on dirt roads,” recalled the U.S. official. “Additionally, artisanal mining communities are very migrant in nature, so sometimes you start working with some miners and then they move out of the community.”

Diamond Valuation
The PRADD program in CAR intensified its efforts to improve miners’ ability to valuate diamonds by building five diamond valuation workrooms in the country in early 2011. PRADD will transfer the workrooms over to local communities in October 2011 after a joint evaluation with CAR’s MMEH.

PRADD and CAR’s MMEH also make members take an “Oath of Use,” whereby if they break certain rules, such as selling to unlicensed collectors, raising valuation fees or taking the valuation kit out of the workroom, they will lose all access to the equipment. Though the cost of these workrooms and equipment is relatively low for PRADD — around $5,000 each — the program takes the upkeep of these rooms very seriously. As the USAID official put it, “When we improve their knowledge and ability to valuate and prospect for diamonds, we in turn improve diamond production capability, and increase income to their community.”

Future Efforts
“Since 2007, PRADD has demonstrated its success and has reduced conflict in the areas where people were not investing in the property,” noted the USAID official, adding that while the program is focused on its efforts in CAR and Liberia, it is also looking to eventually expand to other diamond-producing countries in Africa, especially if the popularity of the program catches on and additional program funds can be made available. “We’ve been exploring partnerships with various foundations and companies, but at this point, we don’t have any signed agreements or commitments.”

Article from the Rapaport Magazine – August 2011.