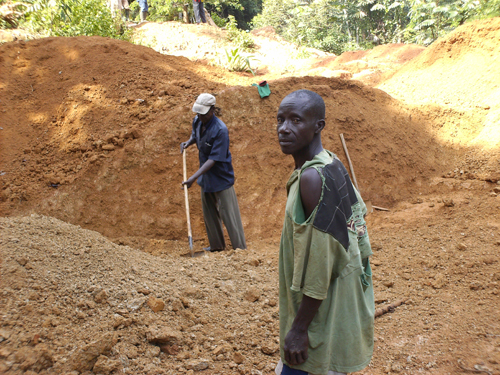 The visit of five MPs to PRADD-supported mining villages of Sangha-Mbaere in the Central African Republic (CAR) from September 27 to 30, 2010 was a success beyond expectations.

The Rapporteur of the Natural Resource Committee declared on national media that the license fee should be reduced and that the Minister of Mines will be asked to appear before the Commission to that end. The Rapporteur of the Finance Committee ensured that the Committee will work on propositions of reform with the Ministry of Finances. All of them declared publicly that PRADD trainings on diamond evaluation should be broadened, and members of the Gender Committee and Natural Resources Committee proposed that a reduced fee be applied to vulnerable categories of miners such as widows and indigenous peoples (i.e. pygmies). Concrete innovative propositions were made to PRADD in order to boost the creation of cooperatives and link them to state-supported buying houses. All participants warmly greeted PRADD for this “politically ingenious initiative” six months before the parliamentary elections, and agreed to remain focused on the matter and to circulate PRADD reports in the Parliament on a regular basis. The population itself was overly enthusiastic at what was described as “the first visit of a parliamentary delegation to remote villages since the 1960 independence”. The event hit the news with an unexpected success too. Meanwhile, the autumn parliamentary session opened on Friday, October 1, 2010.