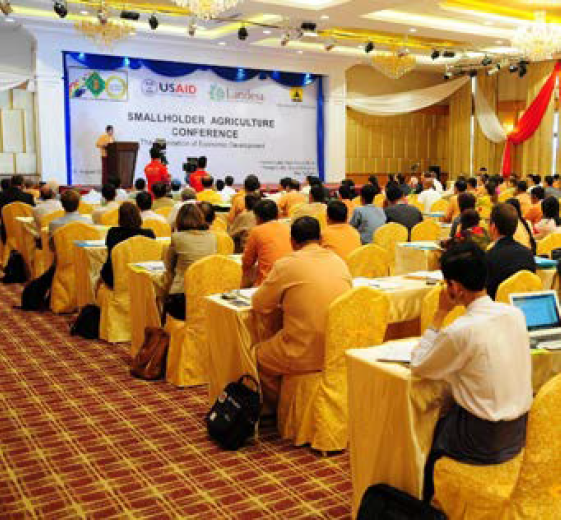 To support the government of Burma to increase land access for the rural poor—including women and minority groups—the USAID Land Tenure Project worked with government stakeholders to draft the country’s first-ever National Land Use Policy (NLUP). The policy was adopted by the government in 2015, after a two-year participatory, inclusive public consultation process that was funded and designed by the Land Tenure Project to ensure the needs of landless and vulnerable groups were represented. Approximately 67% of Burma’s population lives in rural areas, and the majority depend on the agricultural land to earn a living. Yet up to 50% of rural households in Burma are landless, and poverty in rural areas is high. The new policy will increase access to land for this population.

In November 2015, elections brought new leadership to the country of Burma. The NLUP was seen by some as a policy associated with the outgoing administration. Through extensive outreach with the new administration, the Land Tenure Project was able to effectively articulate the importance of the NLUP and was ultimately able to usher this policy through two administrations successfully.

In August 2016, the Land Tenure Project supported a meeting in Naypyitaw in which 200 stakeholders from Parliament, farmers’ associations, and civil society, along with international experts, shared and learned methods for increasing tenure security for smallholder farmers. The meeting was opened by Dr. Tun Win, Deputy Minister of Agriculture, who reinforced the importance of an equitable land resource management approach, while reminding attendees that while the NLUP has been endorsed, work remains to be done on formulating new land-related legislation, and updating existing laws in line with the articles of the NLUP.

In his closing remarks, Dr. Tun Win confirmed that the new administration has fully adopted the NLUP and considers it the official land use policy of Burma—the first time the policy was officially recognized by the government, and signaling an incredibly successful outcome for the program.