This report details the outcomes and lessons learned from piloting SHG land leasing groups with the two SHGs – Subho Chandimata and Eid Mubarak – selected to participate in group leasing in the first year of the USAID-PepsiCo partnership.

During the 2019 – 2020 potato season, the Integrated Land and Resource Governance (ILRG) program supported two women’s self-help groups (SHGs) to lease land and produce commercial potatoes as part of PepsiCo’s supply chain in West Bengal, India. ILRG undertook this novel initiative as part of an innovative partnership between the United States Agency for International Development (USAID) and PepsiCo in India, with funding from the Women’s Global Development and Prosperity (W-GDP) Fund at USAID. The partnership aims to demonstrate the business case that empowering women makes good economic and social sense, leading to adoption of sustainable farming practices, improved yields and income for farming families, and increased profitability for companies. The project uses approaches to reach, benefit, and empower women in the potato supply chain, strengthening women’s land tenure security, creating improved employment and entrepreneurial opportunities for women, and promoting increased social acceptance of women’s role as farmers. This project, implemented under the ILRG program, is led by Tetra Tech in collaboration with Landesa. 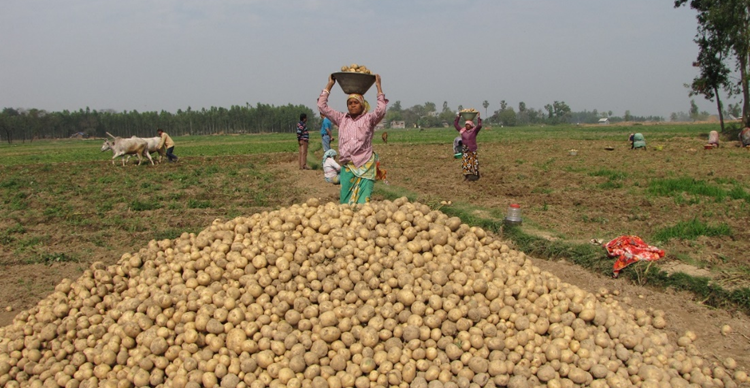 This report details the outcomes and lessons learned from piloting SHG land leasing groups with the two SHGs – Subho Chandimata and Eid Mubarak – selected to participate in group leasing in the first year of the USAID-PepsiCo partnership.

The project supported SHG leasing groups for several reasons. First, supporting SHG leasing groups helps to increase women’s participation in potato farming and the proportion of potatoes sourced from women-managed farms. Second, SHG leasing groups demonstrate women’s capacity and ability to manage all aspects of PepsiCo potato farming operations, which can help to break down social and economic barriers inhibiting women’s full participation in the potato supply chain. Third, women benefit from gaining knowledge and skills from their increased involvement in potato farming and participation in PepsiCo training, which helps to increase their personal agency and income. Fourth, SHG leasing groups provide an opportunity for women to test and adopt innovative and sustainable farming practices, which could in turn influence women’s families and the community at large to adopt similar practices and improve women’s standing in their households and communities. Fifth, the fact that SHGs are federated as a statewide network may provide a strong platform for replicating this work in other districts. Overall, piloting land leasing with SHGs empowered the women involved, helped to raise awareness of and sensitivity to gender issues within PepsiCo staff, and provided a scalable example of a means to increase women’s participation within the potato supply chain.

Despite some unfavorable weather conditions and blight infection that affected yields, both groups successfully cultivated PepsiCo potatoes and made a small profit. While the women were somewhat disappointed in the financial outcome, they also recognized that they fared similarly or better than other PepsiCo farmers this potato season. Despite a somewhat discouraging financial result (see Table 1), women stated that they were proud of the knowledge, experience, and skills they gained over the course of the season. Both groups tentatively plan to cultivate PepsiCo potatoes again next year, when they hope this year’s lessons and experiences can help them achieve greater financial success.

Briefly, lessons learned this season include: