The government of Ghana and USAID recognize that strengthening land and tree rights is critical for Ghana to achieve its development goals both within the cocoa sector and more broadly.

The government of Ghana claims state ownership of all “naturally occurring” trees, including on land privately held under customary title. The lack of tree tenure and inability to capture economic benefits from trees is a major driver of tree loss and disincentivizes cocoa agroforestry. This brief analyzes tree tenure law and policy in Ghana, including the proposed tree registration policy and justifications for state ownership of naturally occurring trees based in the 1992 Constitution. The authors propose an alternative interpretation of the 1992 Constitution based on customary law and usage that allows devolution of all tree rights to customary landowners without a constitutional amendment and removes the need for a tree registry. Evidence from devolution of tree tenure in the Sahel and China show that devolution can lead to increased tree cover. Based on this analysis a series of recommendations on tree tenure reform are posed for government, the cocoa sector, donors, and civil society. 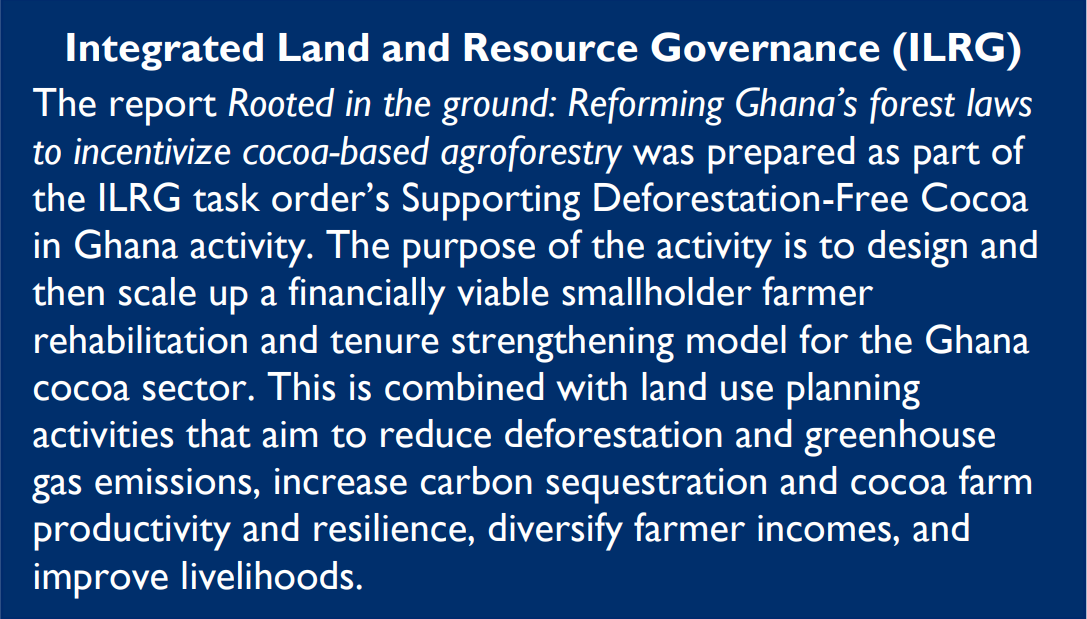 Ghana is the world’s second largest cocoa producer, and cocoa plays a critically important role in the economy with an estimated 30 percent of Ghana’s population dependent on cocoa for part or all their livelihoods. However, the cocoa sector is in trouble and smallholder cocoa production does not provide a reliable livelihood or ensure a healthy and sustainable ecosystem.

Traditional cocoa farms retained large shade trees which preserved many economically and environmentally important trees within the landscape. In the late 1950s the government inserted itself into the timber market and claimed rights to naturally occurring trees on cocoa farms. This led to increased timber harvesting from cocoa farms that was exacerbated in the 1980s when Ghana’s cocoa marketing board changed its policy and advocated removing shade trees and switching to more sun tolerant cocoa varieties to increase productivity. The new cocoa board policy produced short-term yield gains, but also increased susceptibility to diseases and shortened cocoa trees’ productive life. The combined pressures from forestry and cocoa led to deforestation and fragmentation of forest landscape in Ghana’s high forest zone and widespread removal of shade trees from farms. An average of 138,000 hectares of forest was lost per year from 2000 to 2015 and in 2007 it was estimated that 72 percent of cocoa farms across Ghana had “no to light” levels of shade.

The government of Ghana and cocoa industry actors acknowledge the vital role of improved cocoa production systems to mitigate and adapt to climate change, maintain biodiversity, conserve and enhance ecosystem services, and improve the livelihoods of cocoa farmers and their families. They recognize that increasing the diversity of shade tree species in Ghana’s cocoa-growing landscape is critical to improve the health and sustainability of cocoa production and diversify income and resilience for cocoa households.