Thanks to increased capacity, Fuentedeoro will title 40 public properties in the name of the municipality by 2019.

How strengthening the capacity of local governments to formalize land opens doors to investment and rural development. 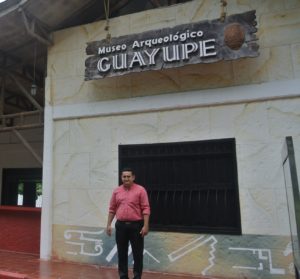 The small town of Puerto Santander anxiously awaited the installation of its first sewage system when city workers unearthed quite the surprise. Calcified human bones, ceramic shards, and urns turned up in a layer of sediment less than a meter below the surface. It turns out the town, which borders the Ariari River in Meta, sits on land that was once a burial ground for the ancient Guayupe people.

Following the discovery, residents began digging up their yards, yielding fascinating pieces like bowls, tools, and funeral urns with ornate designs depicting bats with human characteristics. At first, they stored all these pieces in a room behind the police station. Eventually, they converted this room into a makeshift museum. But due to humidity and a lack of protection, some of the pieces began falling apart.

Oscar Ortiz, who lives in the area, began to worry about losing what up until that point was arguably the most important archaeological discovery in the region of Meta.

“It was hard to find help to support this initiative. We had experts visit who taught the community the importance of not moving artifacts from the ground,” explains Ortiz, who is now the museum’s tour guide and de facto curator. “Much of our knowledge of the Guayupe depends on carbon dating, and when the pieces are not carefully handled, we lose that history.”

In 2001, the Fuentedeoro municipal government spent its own money to convert the police stand into a small museum. However, the land on which the police station stands had never been formalized, and this lack of a registered property title made it difficult for the municipality to mobilize funds from regional and national government agencies to invest in the museum.

Until today, the museum has financed its activities with money from entry fees and donations. In 2016, more than 1,500 visitors walked through its doors. Ortiz continued to advocate for formalizing the land in the name of the municipality so that investments could be substantially increased, but the municipality lacked the experience and technical expertise to make it happen.

A Model for a Land Office

In 2016, Fuentedeoro’s mayor, Antonio Londoño, joined a group of mayors and land administrators in Santander de Quilichao, Cauca, to learn about their experience establishing and running a municipal land office. The USAID funded Land and Rural Development Program is currently spearheading the municipal land office concept, which forms a critical part of a larger land formalization strategy in partnership with regional and national land agencies. By adding a land formalization team to the municipality, mayors can title and register lands that house public properties in the name of the municipality, thereby enabling public investment and boosting rural development.

In early 2017, Fuentedeoro’s mayor created a municipal land office using existing financial and human resources within his administration. The team first made a diagnosis of the municipality’s more than 400 public properties to decide which ones to tackle first. In 2017, the five-person formalization team has already titled 16 public properties, including the Guayupe Museum, health clinics, a cemetery, and public parks.

Throughout Colombia, municipalities have traditionally lacked this type of capacity, in part due to insufficient funds and capacity. Further, decades of informality have meant that there are few records in place documenting each property’s history. In many cases, local residents with large landholdings donated the land, but legally speaking, the ownership of the properties is anything but clear.

“If we don’t change the mentality of public administration, Colombian mayors will never realize that the municipality can also title public properties for itself. Until that happens, they will continue following the old model, which involves hiring lawyers and surveyors to do the work,” says Juan Pablo Bernal, the legal expert in Fuentedeoro’s municipal land office.

Now that the mayor’s team has momentum, it expects to title 40 properties in the name of the municipality by 2019. In addition, the formalization team is reorganizing the chaotic state of a series of community housing projects in Fuentedeoro that sit on land donated by the municipality.

“The cadastral information doesn’t match up with the reality of where properties are located. For example, the large park in the middle of the neighborhood is located in a different neighborhood than what is indicated in the cadaster. It’s our job to sort that out,” says Bernal.

In addition to providing technical assistance to the municipal land office, USAID is supporting the land survey team working on the community housing project, which will provide homes for 300 low-income families.

Now that the Guayupe Museum has a proper land title, the museum’s curator, Oscar Ortiz, is working with the regional government to access funding from the Ministry of Culture—hopefully enough to establish a curatorial work plan, including the hardware and installations needed to improve the protection and preservation of the Guayupe artifacts.

“These pieces should be of cultural interest to all Colombians, and we and the government share the responsibility to protect them,” says Ortiz.