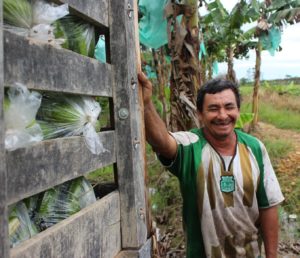 In the wake of the country’s agrarian reforms, thousands of farmers were granted collective ownership of land to boost farmer cooperatives. Many of these businesses never came to fruition, and today the farmers are in an ownership arrangement that makes life difficult for them. In partnership with the government, a USAID land program is disentangling the legal web to deliver individual property titles in Meta.

In 1997, the Colombian government gave Laurencio Avila and 19 other farmers a collective land grant to be divided amongst themselves and their families. The land had not been farmed, though some used it for grazing. The nearest main road was still not paved, and there was no access to basic services like water and electricity. Over ten kilometers away from the municipality center of Fuentedeoro, the 165 hectares of land, known as La Española, felt very isolated.

“We established a main camp up on that hill and started preparing the soil,” explains Avila. Under the deal, each farmer received eight hectares of land and agreed to create an association that would eventually become a cooperative to increase their ability to negotiate with buyers.

The group, which calls itself Asoproes, got off to a rocky start. With no previous experience in running a business this large, members made accusations against one another, and the project slowly fell apart. To make matters worse, the association’s president was disappeared by paramilitaries. Every year, the association had issues with members who could not pay their share of land taxes on time. Soon, the group began looking for ways to turn their communal property into individual parcels; a land title for each family.

“It was embarrassing, because we were these supposedly lucky beneficiaries, and everybody would ask us why we were still poor,” says Avila.

The group sent Julio Cesar Serrano, who was then emerging as the association’s new leader, to Bogotá to meet with public servants from former land administration entity, INCORA, to figure out what they needed to do to get individual property titles. In addition to giving the farmers more power over their futures, property titles are critical for opening doors to financing for rural citizens. Without individual titles, the farmers were losing bank credits that could help them buy inputs or hire labor at the right time. More than 15 years went by with little progress.

“Just two weeks ago, I went to the bank to ask for a loan, but without a cosigner, I don’t qualify. If I had a land title, the evolution of our business would be different,” explains Avila. “Eight million pesos I would have used to buy inputs and hire manual labor. Every year it’s the same, with no capital, the risk of loss is greater.”

In 2015, USAID partnered with Colombia’s leading land administration agencies and local authorities in Fuentedeoro to strengthen institutions and remove some of the bottlenecks in the land formalization process. USAID found a strong ally in the mayor of Fuentedeoro, Alberto Londoño, who in 2016 won the mayoral race with a campaign based on stronger property rights, pledging support for the more than 160 families in the same situation as Avila and his colleagues from La Española.

“I realized that property rights were becoming a major issue for the people of Fuentedeoro. And not just the parceleros [collective landholders], but here in town as well,” says Londoño. “I promised the municipality that I would coordinate this work with the national government or look for a solution with international partners, like USAID.”

When Londoño came into office, the USAID-funded Land and Rural Development Program was looking for motivated partners to work on land formalization issues. While USAID and the National Land Agency worked to disentangle the properties of those families living on communal parcels, Londoño and his administration created a land formalization group within the municipal government. This office took up municipal land titling matters and gave Fuentedeoro’s population a place to go to get answers on property issues.

In addition, the land formalization team served as a liaison to connect the families on the parcels and the USAID contracted experts formalizing their properties.

“First, we went to each communal parcel to check if they wanted to participate. One group said no, since at some point they contracted a lawyer to title their properties. As a land office, our job is to ensure they understood the necessary actions and targeted outcomes,” explains Juan Pablo Bernal, the land office legal expert. In September 2017, USAID helped the 20 farmers from La Española send paperwork to a judge who is expected to issue a ruling on their property request by early 2018. USAID’s methodology to individualize these properties will give the National Land Agency the legal pathway to begin delivering land titles to the more than 50,000 households in Colombia that face the same situation. 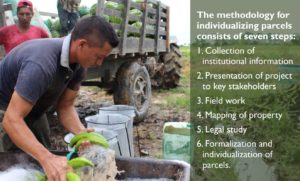 Laurencio Avila and the other farmers from La Española specialize in the production of plantain, and every year they alternate their plantain fields with rice. The lack of access to credit remains their main concern, but climate change, flooding from the nearby Ariari River, and few reliable sales channels also concern them.

To consolidate the sustainability of these formalization activities, USAID has created a series of public-private partnerships in Meta that triangulate support from regional governments with local governments and the private sector. Since 2015, three such partnerships have mobilized investments of nearly US$500,000 and reached some 300 farmers in the milk, plantain, and cacao value chains.

The plantain partnership, which will take place over the next six months, includes investments from both the municipal and departmental governments to provide technical assistance to improve plantain production and quality for more than 100 farmers. Avila and five farmers from La Española are participating in the partnership and attend a farmer’s field school session once a week, where they sharpen their multiplication skills and learn about fertilization and pest management.

Once Avila’s land title is secure, he plans to go back to the same bank for a loan. In addition, he will be able to access government programs and farming subsidies, maximizing the potential of the plantain PPP to bring real changes to the welfare of these families.

“Let’s just say that we ran out of places to go for help. The program came, and now we have high expectations,” says Avila.