“I KNOW TREES CAN BE THE ANSWER” 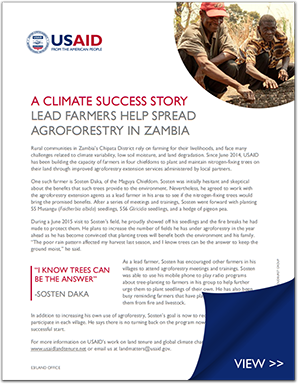 Rural communities in Zambia’s Chipata District rely on farming for their livelihoods, and face many challenges related to climate variability, low soil moisture, and land degradation. Since June 2014, USAID has been building the capacity of farmers in four chiefdoms to plant and maintain nitrogen-fixing trees on their land through improved agroforestry extension services administered by local partners.

One such farmer is Sosten Daka, of the Maguya Chiefdom. Sosten was initially hesitant and skeptical about the benefits that such trees provide to the environment. Nevertheless, he agreed to work with the agroforestry extension agents as a lead farmer in his area to see if the nitrogen-fixing trees would bring the promised benefits. After a series of meetings and trainings, Sosten went forward with planting 55 Musangu (Faidherbia albida) seedlings, 556 Gliricidia seedlings, and a hedge of pigeon pea.

During a June 2015 visit to Sosten’s field, he proudly showed off his seedlings and the fire breaks he had made to protect them. He plans to increase the number of fields he has under agroforestry in the year ahead as he has become convinced that planting trees will benefit both the environment and his family. “The poor rain pattern affected my harvest last season, and I know trees can be the answer to keep the ground moist,” he said.

As a lead farmer, Sosten has encouraged other farmers in his villages to attend agroforestry meetings and trainings. Sosten was able to use his mobile phone to play radio programs about tree-planting to farmers in his group to help further urge them to plant seedlings of their own. He has also been busy reminding farmers that have planted seedlings to protect them from fire and livestock.

In addition to increasing his own use of agroforestry, Sosten’s goal is now to recruit more farmers to participate in each village. He says there is no turning back on the program now that he has had such a successful start.

For more information on USAID’s work on land tenure and global climate change, visit our Land Matters for Climate Change page or email us at landmatters@usaid.gov.