“The Land Office is a big achievement and a great success for municipal administrators and the community. We are bringing land titling to families who have waited 60 years to be recognized as land owners. As a team we are now bringing these services to Valencia’s rural communities, explaining to them that land titling is a process that is totally free.”

A Municipal Land Office in Valencia, Córdoba is helping families protect their property for future generations

Ana Espitia lost her mother two years ago. One day after the funeral, her brother insisted on selling the home that was still in her mother’s name. She was worried and unaware of how she could fight her brother to keep the house where she grew up and had taken care of her cancer-stricken mother in her final years. 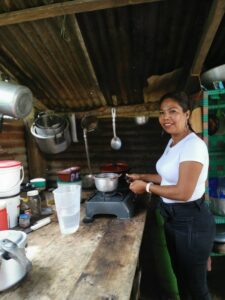 “I was always by my mother’s side and I was going to fight for her home,” Espitia explains. “Then I heard that there was a land office in our municipality, and there, a lawyer explained the process to me.

In 1986, when Espitia was just 12, her mother bought the property in Valencia, a small town in northern Colombia, as a way to escape the violence that was increasing across rural areas. If she were forced to sell the home, she would have to find a place to rent in Valencia in an unfavorable real estate market.

Javier Guerra, the Municipal Land Office’s coordinator, explained to Espitia that in order to sell the property, her brother would need to gather all the signatures of her siblings. She was relieved and began studying how she could legally transfer the title into her name.

“Thanks to the Municipal Land Office, I got the type of advice that a lawyer would charge us a lot of money for, because property issues are always complicated here,” she says.

Espitia worked with her siblings to clarify the ownership of the land. In November 2021, the local land office put the cherry on top when it delivered the registered property title in Ana Espitia’s name. Valencia’s municipal government delivered a total of 45 land titles to residents like Ana Espitia, families who have waited over 30 years to finally prove they are bona fide owners of their properties. Espitia, who works as a cook in an elementary school, got time off from her job to attend the ceremony at the municipal park. 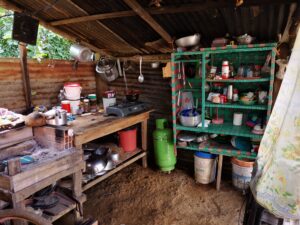 Ana Espitia has made improvements on her childhood home, located in Valencia, Córdoba in Northern Colombia.

The Municipal Land Office was first created in 2015 with USAID support and titled dozens of urban properties in the town’s center. The office, which is embedded in the Municipal Urban Planning Office, ramped up operations last year with additional USAID support. In 2021, the office delivered a total of 68 land titles in 2021.

“The Land Office is a big achievement and a great success for municipal administrators and the community. We are bringing land titling to families who have waited 60 years to be recognized as land owners. As a team we are now bringing these services to Valencia’s rural communities, explaining to them that land titling is a process that is totally free.”

The local land office also plays an important role as liaison for the National Land Agency (ANT), which is leading a massive land formalization campaign in Valencia. The office’s local knowledge is critical for the government’s land formalization teams to understand and manage social dynamics, reach communities, and improve efficiency in identifying and understanding land ownership. The methodology, which was jointly designed by USAID and the ANT, collects property data across the entire municipality, mediates land conflicts, and reduces redundancy among land-related entities. The methodology, which combines land titling with updating the municipal cadaster, helps the government to reduce costs by up to 60% as well as the time it takes to formalize a property and streamline that with the nation’s cadaster.

“It’s important to recognize these efforts of the municipality, since they are not physically visible, but they are of great benefit to the population and communities and together we are fighting to create a municipality of property owners,” Martínez says.

Over the last two years, the USAID-funded Land for Prosperity program (LFP) has supported the creation or re-launch of 26 Municipal Land Offices across Colombia. These offices have already titled more than 1,100 properties for families and over 400 public properties like health clinics and schools. USAID is strengthening the capacity of local leaders to maintain formal land ownership, manage land transactions, and enhance the culture of formalization. Using an approach that develops the capacity of public servants and reaches rural communities has the potential to improve the relationship between the public and government institutions while establishing conditions for leaders to mobilize critical funds for improving their municipalities.

USAID-supported municipal land offices have identified over 39,700 parcels and almost 1,000 public parcels that can be titled through their respective municipalities. USAID-supported municipal land offices have identified over 39,700 parcels and almost 1,000 public parcels that can be titled through their respective municipalities.

With her land title, Ana Espitia has a new outlook on life and gets excited about making investments in her home and yard. She is already planning to pour a concrete floor and improve the bedrooms with doors.

“It’s much easier to make an investment when you know the title is in your hands,” she says. “I feel like I can better organize my life and live with less anxiety.”

In addition, the future of her children also takes on a new meaning. With the land title in her name, she knows she can pass the land down to her daughter and their families. 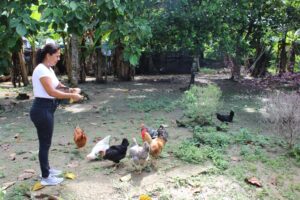 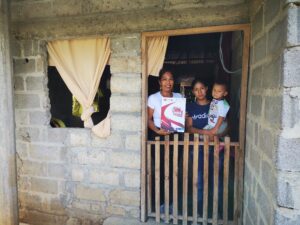 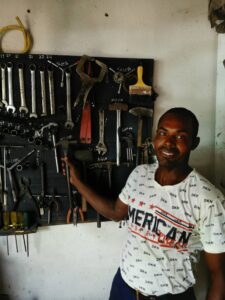 Hamilton Rodríguez came to Valencia, Córdoba in the year 2000, after his father was killed in El Carmen de Bolívar, Bolívar, where they used to live. After the wave of violence, Hamilton settled in Valencia and in 2013 bought the parcel where he now lives with his wife and four of their eight children. The parcel includes the backyard where Hamilton and his wife grow corn and ñame, and the front porch where Hamilton has his mechanics shop and fixes motorcycles.

However, when Hamilton bought his parcel he did it through an unregistered contract, and he did not receive a formal title to his property. In 2019 Colombia’s Rural Agricultural Planning Unit estimated that 70% of Valencia’s citizens did not have a formal title to their property.

In late 2019, Hamilton submitted the paperwork to formalize his parcel but he ran into a problem. “They told me I had to settle all the cadaster debts from my parcel and I had to pay over COP $1 million (around USD $300).” It was very difficult for Hamilton to pay this amount, especially since one of his sons, aged 22, needed surgery to remove a recently discovered tumor. The family had to cover a lot of medical expenses related to the hospital and medicine, and did not have the money to pay the cadaster debt. 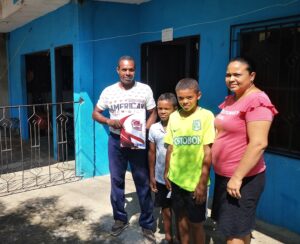 Luckily, thanks to Valencia’s Municipal Land Office, the municipality cancelled all debts and allowed him to start the payments from scratch. Thanks to this decision, Hamilton continued with the titling process and was one of the 45 owners who received their property titles in November 2021. Now that they are the formal owners of their parcel, Hamilton and his wife plan to improve and expand their home and his shop.