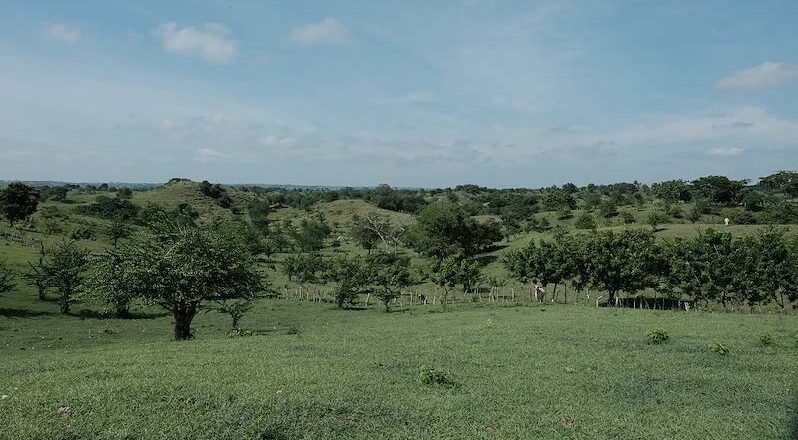 Rural municipalities in Colombia like Santa Rosa del Sur are using a USAID approach to improve land administration and the lives of their residents.

In 1959, the Colombian government passed legislation to create national forest reserves and protect its many natural resources. The law, known as the Ley Segunda, helped to establish several national parks and protect forests from illegal logging and mining. However, for local communities and municipal governments, the law has had a lesser-known consequence: the proliferation of an informal property market.

The entirety of the Santa Rosa del Sur municipality—located in Bolívar in Colombia’s Caribbean region—is protected as a part of the larger Magdalena Forest Reserve. A lack of clear land rights has not helped the municipality deal with activities like illegal gold mining and illicit cropping. Due to the municipality’s geography, only residents in urban areas are allowed to title their land and enjoy the benefits of formal land ownership.

An estimated half of the municipality’s population lives on rural land protected under Colombia’s forest reserve law. The other half—the urban half—does not face this obstacle and is allowed to process property titles for their parcels. Inspired by a USAID-supported municipal land office in nearby Ovejas, Mayor Mendoza also wants to take advantage of one of the few opportunities he has to increase legal property ownership in his municipality. By embedding a local land office in his administration, Mendoza can formalize public properties in the name of the municipality as well as private properties for urban residents.

Over the last year, the USAID-funded Land for Prosperity Activity has coached Mendoza and his administration on how to set up the Santa Rosa del Sur Municipal Land Office. Although this municipality is not one of the Activity’s targets, USAID included it in its training sessions with other municipalities within the Montes de María region, providing the mayors with best practices. Mendoza’s first step was to hire the core team: a lawyer, social worker, and specialist in topography. With no financing from USAID, Mendoza rearranged the municipal budget and found a way to put the office together.

“Other mayors need to understand that the budget will always be insufficient for a mayor of a municipality like ours, so it’s important to search for allies that can help develop your community.” —Fabio Orlando Mendoza, Mayor of Santa Rosa del Sur

In August, the land office made history and delivered the first 19 property titles to families living in Santa Rosa del Sur’s urban center. Nine of the 19 families are registered as victims of the conflict, and 13 are women-headed households. Mendoza presided over a virtual ceremony in the municipal building and delivered the property titles to the new landowners, all wearing masks. In addition, his newly formed land formalization team titled 11 public properties including parks, recreation centers, and two schools.

“If we can help our residents access land titles, in time, the municipality can benefit from the property taxes. For these families, a property title means they can access credit, they can improve their homes, and they can strengthen their businesses,” explains Mendoza.

“If we’re all committed to our communities, then our main goal is seeing our municipality grow. And secure land tenure helps municipalities grow!”

The mayor of Santa Rosa del Sur is not the first one to realize the benefits of a local land administration. Since 2016, USAID has supported more than a dozen municipal land offices that have delivered thousands of land titles, both public and private. In the Montes de Maria region (Sucre and Bolívar) there are three active Municipal Land Offices in Ovejas and San Jacinto (Sucre) and in Carmen de Bolívar (Bolívar).

Depending on the situation, USAID supports these offices with a combination of knowledge sharing, as well as financial and material support, to help them improve their capacities. However, as the concept spreads among Colombia’s rural municipalities that have never played a role in land administration, more and more mayors are seeing the opportunity to improve the lives of their residents while also increasing their tax base. For municipalities like Santa Rosa del Sur, USAID is less the implementer and more the coach.

Mayor Mendoza continues encouraging his team and plans to deliver between 50 and 100 land titles every three months. Before his term ends in 2022, he hopes to have delivered a large portion of the 6,500 urban parcels in the municipality.

“After five years, we see a shift in the strategy. Today, more municipal leaders are interested in making the commitment to set up a local land office. In the end, they are the ones responsible for the whole process and not USAID,” says Carlos Martinez, regional director based in Montes de María, for the USAID Land for Prosperity Activity. “This is a great message for other mayors out there.”

“We are confident. We are doing the awareness raising, the property surveys, and all the work with landowners ourselves. The families are motivated and happy, because this is the first time that they have seen this type of action in our municipality.”