A key evaluation finding is that LTA’s systematic, village-wide support was successful in helping most households obtain a CCRO.

Tenure security improved for both men and women, and to a greater extent for female relative to male households heads.

In rural Tanzania, as in many other low- and middle-income countries, land is a crucial asset that supports livelihoods and enables individuals and households to expand their economic opportunities. Most Tanzanians in rural areas are farmers who obtained their land through long-standing customary norms. However, weak land rights protections and a lack of documented ownership or use rights have long been seen as a source of local disputes, a constraint to how farmers use and invest in their land, and a barrier to household economic growth. A lack of land documentation can limit the participation of women and other vulnerable groups in agribusiness, and women often face higher risk of disenfranchisement of their land rights. How can the development community help? 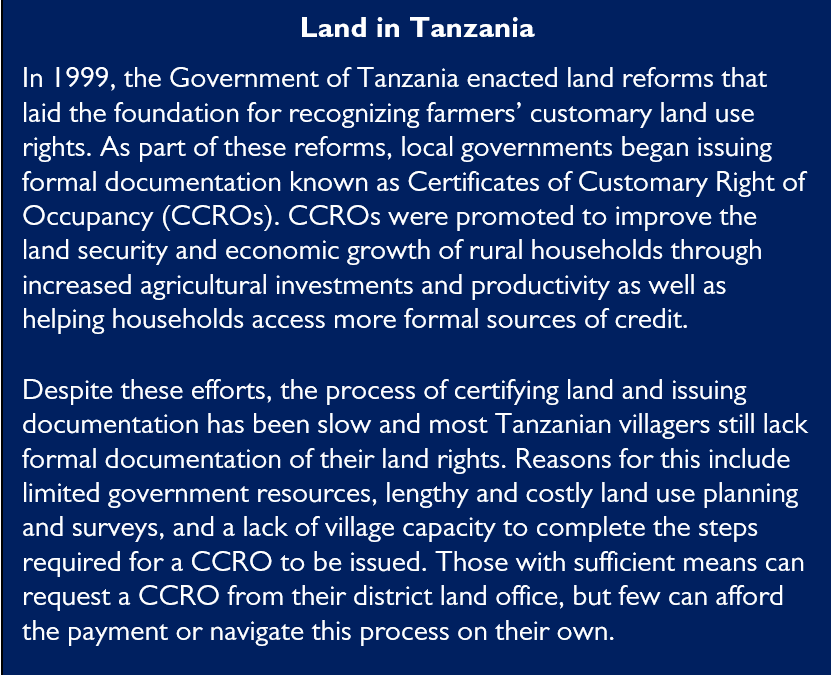 Since 2015, USAID has worked in rural Iringa District, the heart of Tanzania’s southern agricultural region, to strengthen land rights and systematically address the lack of land documentation. Over the past five years, USAID/Tanzania’s Land Tenure Activity (LTA) helped villages and the district land office demarcate more than 70,000 land parcels and register more than 60,000 land certificates (known as CCROs), all using USAID’s digital Mobile Application to Secure Tenure (MAST) technology. LTA represents one of the first times that MAST, which supports mapping and facilitation of the land documentation process using a mobile phone, was implemented on such a large scale.

A key question is whether this innovative approach to create stronger customary land rights has an impact on key development outcomes, such as tenure security (i.e., whether people feel confident no one will take their land or displace them), land disputes, and women’s empowerment. To assess LTA’s impacts on these outcomes, USAID commissioned Management Systems International and NORC at the University of Chicago to design and implement a rigorous impact evaluation. This IE is one of only two USAID land evaluations using a randomized control trial design. 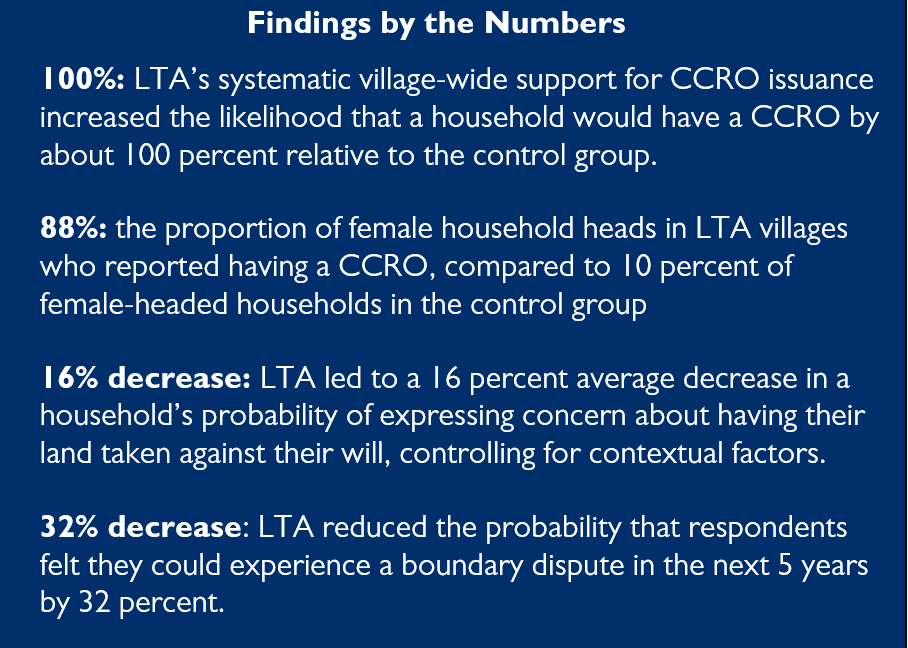 The impact evaluation of LTA has helped USAID measure the activity’s effect on land-related outcomes and understand how systematic certification of customary land rights affects smallholder farmers’ tenure security, investment decisions, empowerment, and broader livelihoods. With increasing land pressures and widespread concerns about land grabbing, knowing the impacts of formalized customary use rights is relevant to both farmers and policymakers.

The evaluation collected data via a panel survey of 1,361 households across 30 LTA villages and 30 control villages as part of a ‘gold standard’ randomized control trial design. The first round of data collection took place right before LTA began implementation in 2017. Endline data collection took place in February 2020, around 18 months after most households received their CCROs with LTA’s support. To understand how CCROs affect perceptions of land tenure security, land use, empowerment, and other key outcomes, the evaluation team interviewed the head of household and primary spouse.

A key evaluation finding is that LTA’s systematic, village-wide support was successful in helping most households obtain a CCRO. The proportion of respondents in LTA-supported villages with a CCRO in the evaluation sample rose from 3 percent at baseline to 86 percent at endline, compared with only 12 percent of control group respondents at endline. This underscores that CCROs remain largely out of reach for typical rural Tanzanian households in the absence of a systematic village-wide support program like LTA. 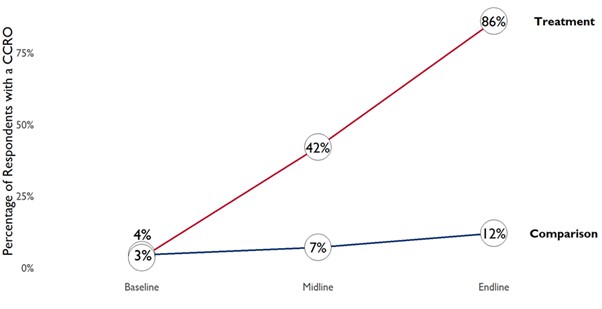 LTA’s support also led to a similarly large increase in formally documented land rights for women in LTA-supported villages as compared with the control group.

The evaluation results suggest that the increase in formalized land documentation also improved household tenure security. To look at common measures of tenure security, we asked household respondents how worried they felt about the risk of land being taken without permission in their community generally and for the land they personally use. The evaluation found significant improvements on both measures due to LTA’s support: an 18 percent decrease on average in a household’s probability of expressing community-wide concern over land expropriation and a 16 percent decrease on average in a household’s probably of feeling tenure insecure.

Tenure security improved for both men and women, and to a greater extent for female relative to male households heads. The evaluation also found a substantial increase in tenure security for female primary spouses supported by LTA. These improvements are especially important in the rural Tanzanian context, where women often have a harder time claiming and defending their land rights or exercising control over land decisions. Based on the evaluation results, USAID/Tanzania’s support for formalized customary land documentation seems to have not only expanded people’s access to CCROs but also led to more equitable access to land documentation in ways that allay gender-based concerns around land grabbing.

Among households that received CCROs, self-reported familiarity with land laws was also higher for female primary spouses than for the male household heads. This finding appears to reflect LTA’s emphasis and awareness raising around women’s land rights, together with opportunities for women to participate in trainings, meetings, and activities in Iringa related to land documentation.

The evaluation results related to credit are more nuanced and provide important learning around the role of CCROs in expanding rural villagers’ access to credit and economic opportunities. The evaluation found no evidence of a change in credit access (stable at around 13 percent for both groups and survey rounds) or amount (around 200,000 Tanzanian shillings or $86) as a result of the CCRO. Iringa District is similar to much of rural Tanzania in that borrowing from formal sources such as commercial banks is low and villagers are stymied by a lack of creditworthy business activities (as perceived by banks), poor business skills, and complicated loan processes. These results also point to wide gender disparities in borrowing sources and amount of credit obtained, underscoring opportunities for targeted programming to bring women’s economic empowerment on par with men. The null results on credit and differential access by gender suggest future programming should address these issues in conjunction with CCRO provisioning, and USAID’s Land Evidence for Economic Rights and Gender Empowerment (LEVERAGE) activity is conducting targeted learning on this topic.

USAID/Tanzania’s support to Iringa villages and the district land office in recognizing customary land rights has been critical in helping rural farmers protect their land, expand their livelihoods, and stave off uncompensated expropriation in the face of rapid urbanization and rural land use change. LTA’s achievements – including helping register around 60,000 CCROs across 30 villages, providing training to 220 women’s groups, and supporting the district land office to lead the technological and administrative process – are notable. The impact evaluation of LTA provides robust evidence of the initial impacts of CCROs to farmer tenure security and other near-term effects, and suggests the foundation has been laid for longer-term benefits to come. This rigorous evaluation suggests that formalizing customary land rights in the rest of Iringa District, and thousands of other villages across Tanzania, is well worth the effort.