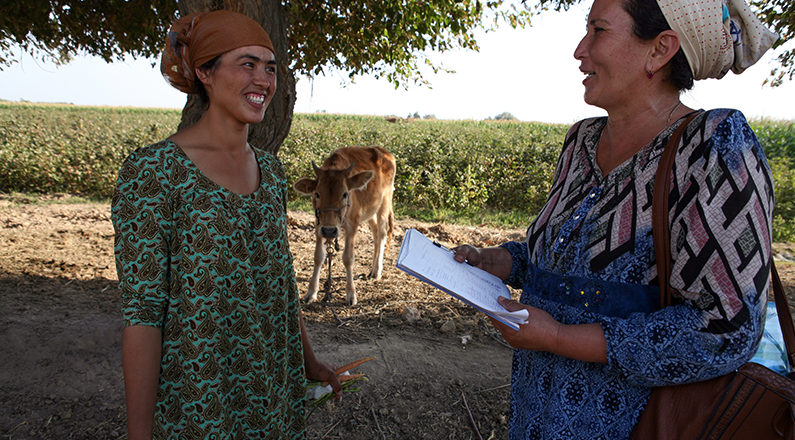 This blog post was originally published on Chemonics Impact Stories.

At age 16, Salomat Chorieva started her first job on a farm in Tajikistan. She endured harsh working conditions, growing cotton and wheat on 700 square meters of farmland. She handed over all her harvests to the head of the farm, who undercompensated her for her labor. Working within a land system dating back to Soviet times further complicated her situation: farmers had little control over their land and little knowledge of their rights. Ms. Chorieva seemingly had little upward mobility and no end goal in sight.

At its inception, Ms. Chorieva’s story was not unusual. Agriculture in Tajikistan accounts for approximately 64 percent of employment, and dehkan farms — post-Soviet individual and family farms in Central Asia — are commonly staffed by women, who typically occupy lower-level positions in the agricultural hierarchy. Yet by age 25, Ms. Chorieva broke the mold — she became the first woman in Khatlon province’s Dusti district to head a dehkan farm. She now runs a 27,500 square-meter plot, and her farm boasts harvests of corn, cucumbers, cotton, green beans, and carrots. With her business, she supports her family of six and makes a decent profit. Owning the farm gives her a sense of freedom.

“I have my own money; I can pay my expenses and taxes and divide the profits among family members who work with me,” she explains.

How did Ms. Chorieva achieve this entrepreneurial feat by age 25? While her resilience, motivation, and agency were certainly crucial ingredients to her success, she was not working alone. Her success was facilitated by Aysifat Norbekova, a tashabbuskor (land rights activist), who works with USAID’s Feed the Future Tajikistan Land Market Development Activity (LMDA) to empower local farmers and guide them through the land registration process. Read the full story