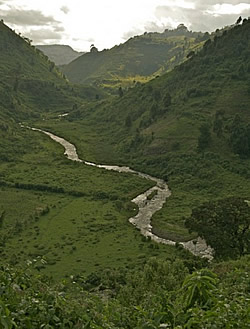 USAID is assisting the Kenya Government (GoK) to restore the forest and watersheds in the Mau Forest Complex (MFC) through a $7 million, two-year project called ProMara (for the Mara). On March 25th 2011, USAID/Kenya’s Deputy Mission Director James Hope officially launched ProMara at the project’s new Mau Outreach Center (MOC), on the outskirts of the forest. The Mau Forest Complex has a history of illegal and irregular land allocations. In 2009, GoK acted on Mau Task Force recommendations to revoke questionable titles, ordering the eviction of “illegal” settlers from the MFC. This resulted in controversy as well as uncertainty among remaining residents.